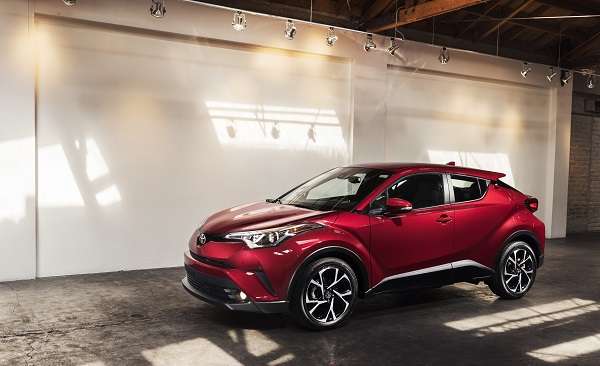 Like it usually does, Toyota has introduced a production model based on a concept from just one year ago. The new 2018 Toyota C-HR, which the company says refers to “Coupe; High-Riding,” will come to the U.S. market in the spring of 2017. This new model will join the excellent Mazda CX-3, the Buick Encore, and popular HR-V from Honda in the sub-compact crossover market. Although this market has not yet seen the extremely high volume of sales that the compact crossovers like RAV4 and CR-V have, it is an emerging segment and if gas prices turn upward, could explode.

The New Toyota C-HR will be built on Toyota’s newest platform, called the Toyota New Global Architecture (TNGA). Shared among many compact and subcompact cars, this new platform will enable Toyota to cost-effectively build multiple models with flexible production and component sharing. Toyota is making big promises that the C-HR will be fun to drive. We’ll see.

The drivetrain will be a 2.0-liter, 144 hp gasoline engine mated to a CVT. Although a stick-shift would be nice as an option, we feel the CVT is a smart move for Toyota. The fuel economy benefits are hard to ignore, and most drivers of mainstream vehicles want automatics anyway. For those that want a sporty feel, Toyota is including a 7-speed Sequential Shiftmatic feature that will mimic a geared transmission. We assume AWD will be optional, but as far as we can see it was not mentioned in Toyota’s initial data-dump.

One area Toyota will be ahead of Honda is safety. At last check, the Honda HR-V did not offer forward collision prevention with automatic braking. This technology has been proven to reduce front-to-back crashes by as much as 40% in real-world testing. The Toyota C-HR will come standard with this important safety technology, just like the 2017 RAV4 and Corolla do.

Toyota’s C-HR has the looks, specs, and lineage to take over this segment in sales in short order. It will be interesting to see how it feels when driven.

LG's New EV Battery Plant Is a Welcome News for Tesla
Tesla Giga Berlin's New Hurdle: It's Not Only the Gov't, but Now Tesla Itself
END_OF_DOCUMENT_TOKEN_TO_BE_REPLACED