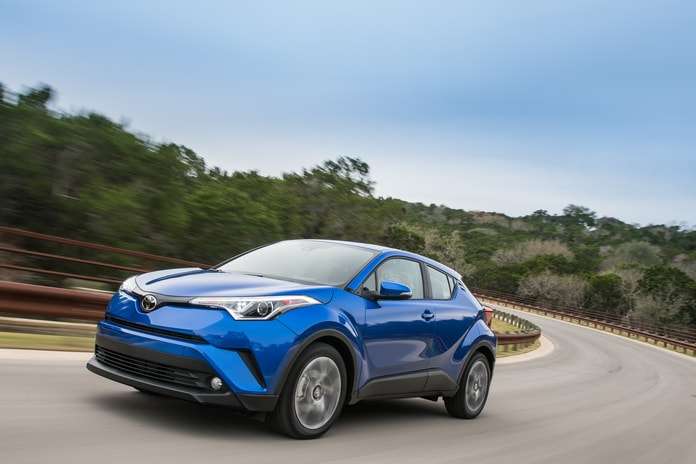 The new 2018 Toyota C-HR is just getting started. Here are some vehicles it is already outselling.
Advertisement

The all-new 2018 Toyota C-HR subcompact crossover has just been launched. In its fifth month of sales, the C-HR has already surpassed the sales rate of some very well-known vehicles. We thought it would be fun to compare the U.S. sales figures of the C-HR to some media darlings we seem to hear so much about. First, some facts and figures. In July, Toyota's sales for the C-HR were 3,444 units. In June, 3,100, in May, 1,848 and year to date through the end of July, 8,942.

Toyota C-HR vs. All of Tesla
In July, the Toyota C-HR outsold the combined sales of all Tesla models. Tesla barely broke 3,000 units in July according to EV advocacy publications.

Toyota C-HR vs. Mazda CX-3
OK, enough of beating up on slow-selling EVs. What about a true, firmly established direct competitor? Well, the car magazines picked the CX-3 as their favorite in the latest comparisons (before the C-HR arrived). The all-new Toyota C-HR outsold the Mazda CX-3 by two to one in July.

Toyota C-HR vs. Nissan Juke
The Nisan Juke was one of the world's first subcompact crossovers. You could say the Juke started this segment. The C-HR looks a bit like the Juke too. In July, the C-HR outsold the Juke by about 4 to 1.

BMW X1 vs. Toyota C-HR
Let's get back to subcompact crossovers again for a minute. The newest BMW is the X1 subcompact crossover. It is an all-new design for 2017, and like the C-HR, is based on a front-drive platform. It is now well established having been on sale since last year. The C-HR outsold the X1 by almost two to one in July. The X1 has not had a sales month as large as the C-HR had in July.

A Variety of GM Models vs. Toyota C-HR
The Toyota C-HR outsold all of these well-know models in July: The Suburban, the Corvette, the Impala, the Spark, the Sonic, the Yukon XL, the Savana, the Canyon, the Regal, the Envision (Buick crossover), the Verano, and finally the Casdcada, in addition to the EVs we started with.

Beau GusPosterman wrote on December 13, 2017 - 1:36am Permalink
The only surprise on this list is the CX-3. Seriously, you're comparing niche-Tesla sales to a niche-Toyota? Not holding my breath on when Toyota will actually do something creative with the engine and tranny options on a C-HR.