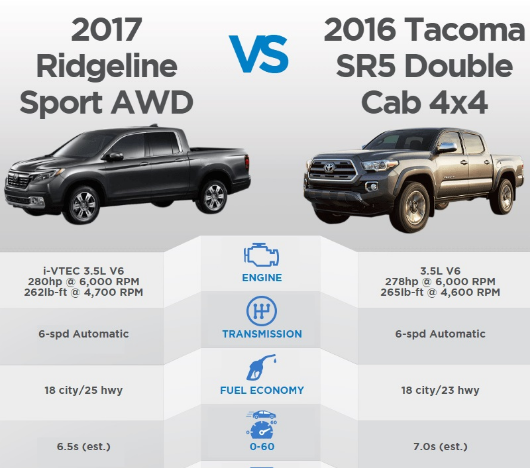 We compare the all-new 2017 Honda Ridgeline Specs to the Industry-leading midsize pickup, the Toyota Tacoma.
Advertisement

The Tacoma is the truck to beat in this segment. Month after month it is the sales leader, but that is only part of the story. GM’s Colorado and Canyon could sell more; they just can’t find any more capacity to build the truck. The same is partly true for Toyota. With production maxed out, it is not clear how many midsize pickups Americans could buy if they were available.

Honda won’t have that problem once it has its production up and running smoothly.One problem it might have faced if it had brought a weakling truck to market would have been the “tale of the tape” to steal a boxing term. The Honda needs to match the Tacoma on paper. Let’s see how it stacks up in V6, AWD form against the Tacoma 4x4. (More on Page 2)
- Read Our Impressions After Testing RIdgeline

Engine, Power, Torque, Transmission, Fuel Economy
Under the hood, the Honda Ridgeline’s 3.5-liter V6 and the Tacoma’s 3.5-liter V6 seem almost identical. Both have about the same power and torque, but the Tacoma’s slight torque advantage comes lower in the RPM range. It’s hardly worth mentioning, though it is so slight. Both use six-speed automatics, though the Tacoma can also be outfitted with a manual transmission. With a combined EPA fuel economy estimate of 21 MPG, the Ridgeline has a slight edge on the 20 MPG the Tacoma earns. These specifications are nearly identical, and we will call it a tie.

Towing, Bed Length, Payload
Regarding all the truck-related specifications the Tacoma has an edge on the Ridgeline across the board. Tacoma’s 6,800-pound towing rating far exceeds the 5,000 that Ridgeline is expected handle. The Tacoma can also come with either a five-foot or six-foot bed giving a customer the choice of convenience or capacity. The Ridgeline will split the difference with its one size fits all five-foot, four-inch bed length. Tacoma’s payload of 1,620 pounds also tops the 1,584 that Honda can deliver, but that is a minor difference. Here the Tacoma has an edge on the Ridgeline, but will it matter? Not to most. Tacoma’s customers rank towing very low on their priority list according to Toyota. The Ridgeline is truck-tough enough.

Conclusion
The Ridgeline comes back to market well prepared to meet the needs of its customers. On paper at least, the Honda Ridgeline and Toyota Tacoma are well matched.

Curt wrote on June 14, 2016 - 3:12pm Permalink
Toyota could double the sales if the plants had the capacity.