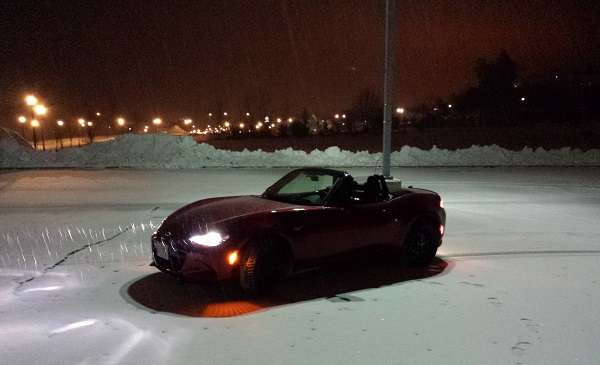 The 2016 Mazda Miata Club arrived in our test fleet this week on the coldest day in two years. -11F For the first two days we had the car, then snow. Anyone that tells you the Mazda Miata is a great commuter car in the dead of winter is either pulling your leg or has no concept of what a good commuter car is. So for the two days when it was below zero, we drove around top up and tolerated the noisy, cramped cabin. Then it warmed up to about 30F and snowed, so, of course, we dropped the top and went for a spin.

Yes, the Miata is cozy at about 30F as long as you wear gloves and a hat. The Club Miata we tested didn’t even have heated seats, yet with the side glass up it was fine. Interestingly, the snow does not come into the cabin as long as you are moving. Many Miata drivers know this is also true of light rain.

The fresh powdery snow came on top of icy compacted snow in our neighborhood. There really is no more difficult challenge for a car than this type of scenario. After about two inches fell we drove off into the white stuff.

The test car we had was wearing Bridgestone LM-60 Blizzak winter rubber, and it made all the difference. The car could always move forward – slowly – even up steep hills. However, the car does a sort of side to side shimmy as the traction control and limited slip differential work in harmony to deliver the power. You have to trust it. At first, it feel like the car is going to step out to the side and not recover, but it does. In cornering, you have a choice. You can go slowly and remain on the driving line, or you can goose the throttle, and the Miata will slide a bit with controllable oversteer. You can apply opposite steering inputs and then the car comes right back predictably. Another option is to disable the traction control and drive it rally style which I did in a parking lot.

With visions of the end of Superbad in my head (a police car in a drift hits a light pole), I let the tail hang out wide and used the throttle to steer. It doesn’t take long to master this and then you can do it on-road if nobody else is around. It’s big fun, and the car makes cool noises while you play. Stopping wasn’t bad at all given the circumstances. You just have to plan ahead.

Having owned an NC Miata for many years that never saw rain, never mind snow, I doubt most owners will ever take their Miata out for snowy rides. These cars are gems worthy of care and should be enjoyed in their proper setting. However, if you do opt to head out in a snowstorm, we offer one word of advice. Blizzaks.

Jes wrote on February 12, 2017 - 4:04pm Permalink
Every Miata owner in New England knows the rear-wheel drive Miata is not a good car for winter driving! The 2016 Miata Club, with the factory summer tires, has next to zero traction in 2 inches of snow! And forget ice of any sort! Even with snow tires on the Miata, even four brand new Blizzaks on the car doesn't perform much better. I know because I had owned four brand new Blizzaks which I had mounted on one of my Miatas! I used to get stuck sometimes in my own driveway with the Blizzaks on so I hope you can understand where I’m coming from! I live in New Hampshire and am driving my 4th Miata now. I currently have a 2016 Miata Club which I'm making payments on up the ying yang. When I moved to the White Mountains in December I took a chance and instead of buying snow tires which I knew would suck in substantial snow I purchased tire chains instead! They're legal in New Hampshire. The tire chains I use mount within seconds! I remove them as soon as the roads are clear because my tire chains were not cheap to buy! I store them in my trunk when not in use. They work in my situation so when the weather forecast here calls for more than a few inches of snow I head out and pop the tire chains on! I can't drive over 30 mph with these so highway use is restricted, but city driving is easy and fun! People look at my car because I drive it in snow storms! The tire chains are even great on ice when driving up on the mountain roads. My car occasionally bottoms-out in deep snow, but as long as the rear tires touch the ground I have traction and never get stuck! These tire chains are Thule CU-9 Size 80 which fit the Mazda 205/45R17 factory summer tires. They have plastic clips strategically placed to protect the wheels from getting scratched.