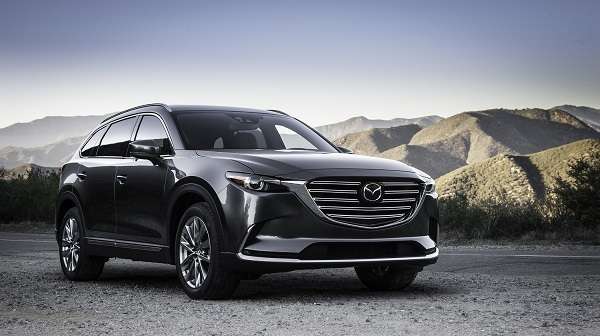 The official ratings are in. How does the 2016 Mazda CX-9 rank for fuel economy?
Advertisement

Mazda’s 2016 CX-9 is the first vehicle in its peer group to offer only a four-cylinder engine. The Toyota Highlander, Nissan Pathfinder, and Honda Pilot sell with a V6 and Toyota’s Highlander Hybrid also has a V6 engine. We turned to FuelEconomy.gov to find out how much less (or more) the new Mazda CX-9 costs per mile for fuel.

The reason we are doing this exercise is to confirm or bust the myth that small, four-cylinder turbocharged engines are equally powerful and more fuel efficient than modern V6 engines when used in three-row crossovers. The power is the easiest part to compare. The Mazda is less powerful. Rated at just 227 hp when using regular fuel (which is how it was tested by EPA for fuel economy) the Mazda CX-9 does not come close to the power of its peers. The Highlander has 270 hp, the Highlander Hybrid has 280 hp, the Honda Pilot 280, and the Nissan Pathfinder 260 hp.

For our fuel economy comparison, we will rely on FuelEconomy.org’s cost per year for fuel. The group uses 15,000 miles mixed as 45% city and 55% highway driving to arrive at its estimates. More importantly, the group uses today’s (low) gas prices to come up with its annual fuel costs (so if you read this story in a year or two the numbers won't match up perfectly). We chose to compare the AWD versions of each vehicle. In many markets, that is the only way these vehicles are stocked by dealers and AWD trims make up the bulk of overall sales. (More on page 2)

The CX-9 is the lowest cost per year of fuel at $1,450 per year - except when compared to the Highlander Hybrid. Both the Pathfinder and Pilot come it at $1,550, so per year, the Mazda’s smaller engine saves its driver $100. The Highlander costs its driver, $1,700 per year for fuel, so the CX-9 is a pretty significant $ 250 lower in fuel costs than that top-seller. However, the Highlander Hybrid* blows them all away. It’s annual fuel costs are just $1,200. Yes, the Highlander costs roughly $5k more than a comparably-equipped CX-9. So at today’s fuel prices it would take 20 years to recoup the added costs.

Our analysis shows that regarding power, the smaller turbo is not comparable. However, torque is better at low-end RPMs in turbo engines though, and that can help equalize the feeling of strength. Fuel economy is very similar between the CX-9 and two rivals. The CX-9 also tops the conventional Highlander, but uses more fuel than the pricey Highlander Hybrid.

George Marfo wrote on July 30, 2016 - 11:52pm Permalink
I will like to see the compelling Toyota highlander and Mazda cx9 price duarlablity