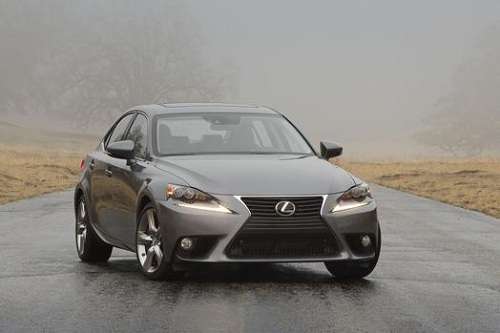 The new 2014 Lexus IS line will cost almost 20% less than a similarly equipped BMW. Lexus will now offer 306 hp for the price of BMW's 240 hp model. Here are the details on the prices for the new Lexus IS line.
Advertisement

Lexus has redesigned the IS and the new 2014 models will be priced less than outgoing 2013 models. The IS350s in particular will see a significant reduction in price when comparably equipped. It is no secret that the BMW 3 Series defines the compact/mid-size sport sedan market. It is the one area that BMW leads the market in which it competes in terms of sales. Every automaker that tries to compete with the 3 Series thinks that if they simply build an equal model that their sales will approach those of BMW. They are wrong.

Not only are they wrong, time has proven that they have trouble even understanding what drives BMW shoppers. It wasn’t the in-line six cylinder engine. BMW has proven that by moving to a 2.0 liter, four cylinder turbo for the bulk of its production numbers. It wasn’t the size. BMW has super-sized the 3 Series to the point that it is now about as big as the 5 Series was a few generations ago. It isn’t the price, since BMW leads the field with a significantly higher price tag for an equally equipped model when compared to the Lexus IS, the Infiniti G (now Q50) and the Cadillac ATS. However, price is one area that the competition has the ability to fiddle with, and Lexus has been fiddling.

Lexus claims that the new 2014 IS250 and IS350 will be less expensive than past models by about 2 percent. While that is not much, consider that instead of increasing the price of its new models, it has reduced them. In order to gain an understanding of the price difference between the BMW 3 Series and the Lexus IS we compared two versions of the 2013 model year cars and here are our findings:

Both of these vehicles have six cylinder engines and they both have about the same power. Lexus has 306hp compared to the BMW’s 300hp. Using the on-line “Build your own” we matched them up as evenly as possible. If Lexus statements about its pricing hold true, the new IS will be a much better vehicle and cost about $1,000 less than the price above.

Next we matched up the popular base engine and all-wheel-drive combination. Walk a showroom floor and you will see how popular this combination is. Here BMW has the power advantage with 240hp from its four cylinder and the Lexus has only 204hp. However, that didn’t seem to turn off buyers and the IS250 is by far Lexus most popular IS. Selecting AWD, and Nav and choosing models that both have leather we came up the following comparison:

What is becoming clear is that Lexus is now able to offer the IS350 at lower prices than BMW’s 328i four cylinder car. Possibly much lower. Although there is a core group of BMW buyers that don’t buy Lexus cars, there is also a group that will take a look when they hear that they have 306 hp from Lexus compared to 240 (from a four cylinder) in the BMW for the same price.

Lexus and Infiniti buyers will be the happiest of all shoppers to hear this news. Combined with the significant increase in legroom and improvements in fuel economy, the new lower pricing may lure more Lexus to stay with the IS and lure in more Infiniti shoppers than in the past.

The following chart helps to overview the new 2014 Lexus IS line pricing. Destination charges of $895 are not included below.

Anonymous wrote on April 29, 2013 - 4:33pm Permalink
If it were about price, we'd all be driving Yugos. Look at the photo again. I won't say it's ugly, but it's sure not going to lure away any serious BMW fans.
John Goreham wrote on April 29, 2013 - 6:52pm Permalink
Thank you for your comment. It is a good point. However, I am just so grateful the first comment on the story was not about the lack of a manual transmission!

Tesla Contemplates A New Strategy for China Retail even As Sales Boom
Jay Leno on Elon Musk & EVs: “I Think He Should Get ... Credit"
END_OF_DOCUMENT_TOKEN_TO_BE_REPLACED