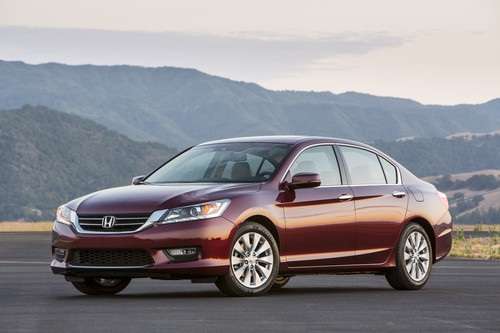 2013 Honda Accord details revealed by Honda

The car that defines the segment is newly restyled and has updates to every major system.
Advertisement

The press release by Honda for the all-new 2013 Accord begins “Better, not bigger.” Halleluiah. The Accord has grown from a small compact car during its introduction to a car just a little small for its aspirations, then was absolutely the right size, and sadly was grown to be just a little portly and too large. Very American that, but not in a good way. Frankly, it would be easy to stop here and just say “it is fixed”, but Honda has made noteworthy changes that it feels will make the Accord a leader again in the segment.

The 2013 Accord Release Schedule
The Accord will roll out in stages. The ones that will sell well are coming first. Those are the conventionally powered four and six (yes six) cylinder models. We will key in on those here in this story and leave the rest for later when they are released. Suffice it to say a plug in and also a more standard hybrid will join the lineup. In exactly two weeks, on September 19th, the sedan will arrive and then in October, the coupe.

Powertrain Changes
Engines now have to have their own marketing programs and the 2013 Accord is no different. So like Mazda, which dubbed its powertrains “Skyactive” which means slow, but fuel efficient, Honda now calls its engines “Earth Dreams.” OK, we will wait while you vomit. Honda has also introduced all new transmissions including a continuously variable transmission (CVT) on the 2.4 liter four (boo). A manual transmission will be offered in this very big, front wheel drive family sedan for the 12 Americans who are so confused about car enthusiasm that they absolutely must row their own gears on the way to the PTA meeting. Jumping right in to the last decade, Honda will also now use 6 speed automatic transmissions for the 3.5 liter six cylinder. Let us be thankful that there is a six cylinder. Honda should be applauded for sticking to the more expensive six instead of pretending a turbo-four would offer the same performance with better fuel economy. Four cylinder models will get 36 mpg highway, which only a few years ago was hybrid territory, and the six-cylinder, which will be a rocket, will get a class competitive 34 mpg. By that we mean it will be competitive with the 4-cylinder turbo engines that Hyundai, GM, and others market as fuel efficient and powerful.

Infotainment
Honda will update its infotainment systemsand offer a new product called HondaLink available to interface with smart phones and provide music and other app-based services. In addition Honda claims that it will enable users to put away their phones and mobile devices. A large information display and Bluetooth will be standard.

Safety
Safety options for cars seem to be moving faster than any other technology. Most of what the premium brands offered exclusively only 2 or 3 years back, can now be found in an Accord (and all of its competitors). Lane departure warning, forward collision warning, and newly designed side airbags highlight the changes from previous models.

Based on information supplied by Honda it would appear the 2013 Accord has the content needed to compete well in its class. What still remains to be seen is if it has its mojo back.