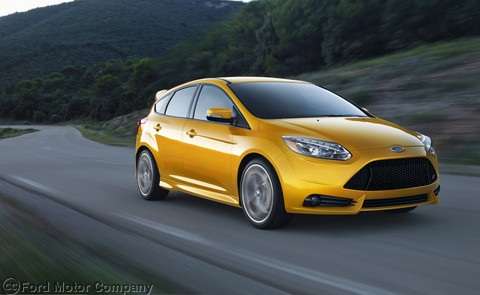 Add the 2013 Ford Focus ST to the list of pocket rockets available to enthusiasts in the US. This segment has long been dominated by four entries; The Subaru WRX, The Golf GTI, the Mazdaspeed 3, and the Honda Civic SI. Each of these four vehicles has its own personalities and its own list of plus and minus checks in the capabilities column. One thing they all offer is a world-class sporty driving experience for enthusiasts on a budget. The New Focus ST might bring a new level of frugality to this close-knit group.

Sport Compact Class Leaders
Many car enthusiasts start off in the compact, front drive (or all-wheel drive in the case of the WRX) category and until Ford offered the Focus in ST trim it was never a consideration. These four or five seat, two or four door cars offer practicality when going out with pals, good storage space with rear seats dropped, and are not really economy cars. Most have decent content and won’t embarrass the driver on a first date. These types of vehicles are also used in the various Rally series in the US and world-wide and the Focus is very competitive in that arena. Ford has wisely decided to join the group of sporty sub-compacts and in doing so might just earn itself some customer loyalty as these customers step up to their next ride which might either be a Fusion, or crossover.

Focus ST Fuel Economy
Although the 2013 Ford Focus ST’s fuel economy rating of 32 highway is not outstanding for a subcompact, many now get 40 mpg including one of the Focus variants, 32 on the highway for a car with this much power, in this configuration is now class-leading. The Volkswagen GTI and the Civic SI are both close with 31mpg highway, but the WRX is way out of contention with just 25mpg highway. Material that became available just after this article was published the first time now states that the Focus ST will get 26mpg combined. That does edge out the top competitors overall. Thus, based on this new information from Ford, the Focus ST will be the segment leader in both highway and combined EPA fuel economy.

2.0L EcoBoost Power
At the core of Ford’s new 2013 Focus ST’s ability to reach this level of efficiency is its new 2.0 liter EcoBoost engine. Small, turbocharged engines are not new to this segment. All but the Civic have used them for many years, but this is a new configuration for Ford. Although Ford came late to the party, it came to play. This engine is now found in many vehicles including the larger vehicles Ford produces. It is even found in the Police Interceptor Unititly Vehicles. It would be fun to see one of those heavy weights try to intercept this little buzz-bomb.

For our full overview of the 2013 Ford Focus ST please see Patrick Rall’s recent sneak peek. From all appearances Ford has leaped onto the scene with a possible class leader, and a definite contender.