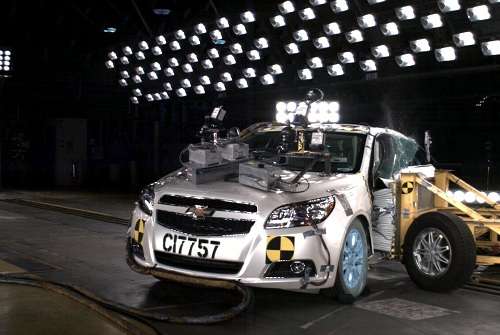 The 2013 Chevy Malibu Eco getting safer

The Chevy Malibu has been an underachiever in the past. Despite claims that Chevy produces as good a mid-size car as anyone in the world, the brand is ranked 16th in quality by J.D. Power and Associates (2011 Initial Quality) and the car has never been number one or two on the best sellers list. Heading into model 2013 the Chevy Malibu has a lot riding on the new design. If it plans to keep pace with the Honda Accord, Toyota Camry, and Hyundai Sonata it will need to be excellent in all areas, not just have the highest “Instant Cash Rebate.”

Design for safety is now the industry’s requirement for success. Cars that are being updated always are designed to do well in the safety tests. That is why all new sedans have a curved “A” pillar, the roof and windshield support that stretches from the front of the hood where it meets the door, to the roof. By arching that frame, the overall body is strengthened. Use of higher quality, higher tensile strength steel in critical areas has also become the industry standard resulting in a slight cost increase, but savings in weight and improvements in structural rigidity. Gay Kent, GM Executive Director of Vehicle Safety, elaborated in a press release on the subject, saying “We are now seeing the results from our commitment to design the highest-rated vehicles in the world in safety performance. Earning these top safety ratings demonstrates the strength of the Malibu’s advanced structure, overall crashworthiness and effectiveness of the vehicle’s state-of-the-art safety technologies.”

In order to score high on the Insurance Institute For Highway Safety (IIHS) a car needs to be good in all crash tests, not just one. The 2012 Chevy Malibu Eco scored “good”, the highest rating in Front, side, rollover, roof crush, and rear-impact head restraint testing. Thus, it was awarded a “Top Safety Pick” designation by the IIHS. More and more this highest rating is becoming an assumption by buyers, so Chevy will still hold the attention of those doing research on their next affordable family hauler.
The National Highway Traffic Safety Administration (NHTSA) also tests and rates cars of course, and the 2013 Chevy Malibu Eco was able to pull out a 5-Star overall rating even though it was just under the 5-star rating in the government’s rollover testing. The Malibu also received top marks in the European New Car Assessment Program when it was tested last fall.

Chevy is trying hard to be one of the safest car brands on the road and the 2013 Chevy Malibu Eco joins the Camaro, Sonic, Cruze, Volt, and Traverse in achieving the top safety ratings possible.