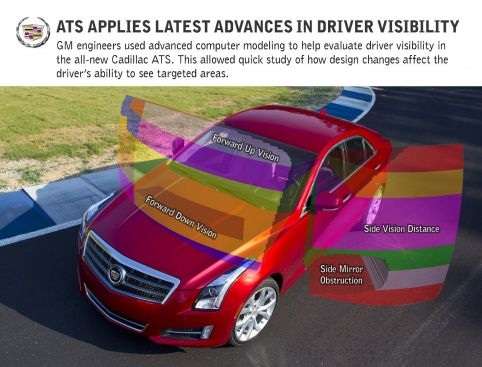 Designers know that the ability to see out is a key consideration in this segment. This is not often discussed by auto enthusiast writers in new car tests, but it is a key buying parameter for savvy buyers.
Advertisement

The new 2013 Cadillac ATS was designed to be lightweight, sporty, luxurious, and to have excellent visibility. Visibility is not a number you will find on a specification sheet, there is not a category to win in car magazine comparison testing, and it is not glamorous. It isn’t something that comes up much until a person shops for a car and does a test drive.

As the resident car-nut in the family this author is the go-to guy when it comes to new car advice. Recently, a friend asked me to join her on some test drives. She was shopping for a mid-size luxury crossover. She had tested the German offerings and liked one. In order to check out the value offered by the Asian-based luxury makes we visited a dealership. She liked the look and the price of a very popular model, but as soon as she sat in it she said “I can’t see out.” That was the end of that. What that manufacturer had done is created a very attractive swept back windscreen, with a low roof profile. It looked great and certainly contributed to better aerodynamics and fuel economy. However, in comparison to its peers, the vehicle offered poor outward visibility. Thus it lost this sale, and likely thousands more.

Cadillac makes no secret of the fact that when it designed the new 2013 ATS compact sports sedan it benchmarked the BMW 3 series. My friend mentioned above bought an X3. BMW knows that the ability to see out of a car males it a better driving machine and they take great pains to create a “greenhouse”, the glass around the driver, that allows good outward visibility. Cadillac would have loved to offer a pill-box style effect with a super-low roofline, tiny side windows (why not darken them too) and a steeply raked windshield. But it already did a Camaro. What buyers in this segment want is a car that balances looks with functionality. In order to come up with a good balance that allowed the car to look great, but still offer superior visibility Cadillac conducted customer clinics in both Germany (notice how that word keeps coming up) and the US.

All of the elements of the 2013 Cadillac ATS were considered. That included outside mirror size and placement, A-pillar design, side window design, seat height and objects that might obstruct a driver’s vision such as the interior mirror and the car’s multiple headrests. Raj Mehta, General Motors vehicle architecture engineering group manager explained this in a recent press release on the ATS, saying “Conducting clinics in Europe as well as the U.S. provided invaluable insight into the needs of drivers who use demanding roads like the Autobahn. The findings led to new ways of measuring and evaluating visibility despite its highly subjective sensory nature.”

To give themselves metrics to work with, GM engineers working on the 2013 ATS created what they call the Driver Visibility Calculator. Using ultra-strength steel in the A-pillars as part of the overall materials design for the car, Cadillac kept the part thin. This is the biggest obstacle to good outward visibility and Cadillac scored itself a “very good” on this part of the design. The hood was also kept low which not only helps forward visibility, but also helps with fuel economy. David Leone, executive chief engineer commented, saying “Our ability to execute good visibility based on robust scientific methods will be an important tool in the development of Cadillacs to come.”

The Cadillac ATS is on sale now at an approximate price of $10 per pound.