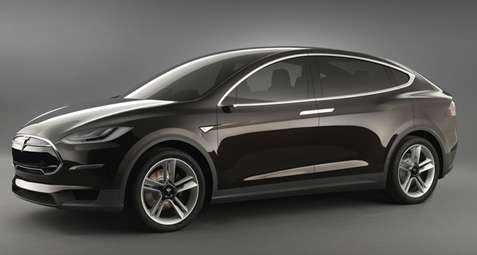 Although the new Tesla Model X is a gender-neutral vehicle, the electric vehicle automaker seems to be marketing the crossover SUV exclusively to women. Gender-oriented advertising is not uncommon, whether it’s a luxury car commercial featuring supermodels or a minivan ad featuring a mother and her kids, but most automakers still use non- gender specific terms when describing the vehicle. Despite this fact, Tesla has decided to associate the Model X with female drivers.

The gender association is evident by taking a glance at the Model X summary of Tesla’s official website, which reads: “Model X is designed from the ground up to blend the best of an SUV with the benefits of a minivan, as only an electric car can. It is an automobile above category, built around the driver—and six of her friends. It artfully provides unfettered performance and brilliant functionality.”

In addition the vehicle overview, Tesla’s website also includes computer generated images of females, while no men are to be seen. Even the SUV’s most unique features appear to be aimed at women. In particular, the Model X’s easy seating and step-in access are geared toward female drivers. The following description is accompanied by the aforementioned female image:

“Third-row access is finally easy. Even with child seats installed, the second-row seats slide all the way forward. Open Falcon Wings let you stand all the way up as you get in and out. Kids no longer leap and tumble over the second row, and adults find the third-row seats as accessible as the passenger seat."

Although Tesla’s innovative design team created the Model X, they did have some outside help. In order to gauge the female psyche, Tesla decided to run numerous test groups with women to discover their likes and dislikes.

"The focus group was great because it validated a lot of our own thinking," said Franz von Holzhausen, Tesla's chief designer. "Women don't want an overly feminine vehicle; they want to feel secure. But it has to be aggressive enough for a guy to feel confident, as well. We didn't want to make a Hello Kitty edition." He also drew on some personal experience when designing the Model X: "My sister has kids, including two in baby seats, and she drives a minivan," said von Holzhausen. "I had to climb over the car seats to get into the back seat, and it seemed ridiculous to have to do gymnastics to get in and out of the car."

Tesla currently plans on launching the Tesla Model X by 2014. A prototype was recently unveiled at Tesla’s design studio in Los Angeles. Pricing has not been announced, but the Model X is expected to qualify for a $7,500 federal tax credit.

MercuryNews.com reports that there are currently over 500 reservations for the upcoming Model X, which primarily includes women purchasing the vehicle for themselves and men buying it for their wives.

For those you wish to reserve a Tesla Model X, get ready to fork over some serious money. Reserving the base model costs $5,000, while the Signature Edition will set drivers back $40,000.