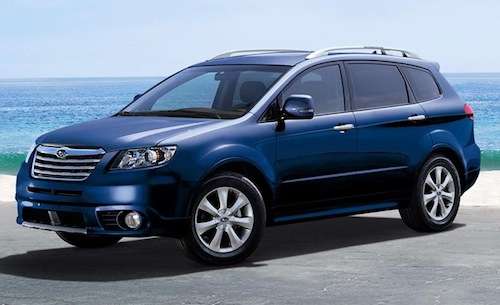 Motor Trend indicates that the Tribeca will no longer be available beyond 2012 due to poor sales and rising gas prices.
Advertisement

Motor Trend is reporting that the Subaru Tribeca will be phased out by the end of 2012, due to its inability to make waves in the crowded midsize SUV market. Peter Lyons, a Japanese correspondent for Motor Trend, first reported the breaking news.

Introduced in 2005, the Subaru Tribeca is a five-door midsize crossover SUV built on the Subaru Legacy platform. Despite a major redesign in 2007, including a new grill design and upgraded 3.6-liter engine, the Tribeca failed to catch on with consumers.

According to Edmunds, “The Tribeca has never found the popular acclaim that Subaru anticipated. There really isn't anything wrong with this midsize crossover, but it never quite cuts through the clutter of competitors. The 2012 Subaru Tribeca excels at very little, which is tough when competing against other family crossovers that are newer, more spacious, better to drive and boast more features.”

When contacted by Motor Trend, a Subaru spokesperson stated, “No, Tribeca is not dead, and will be on sale for the 2013 model year.” That said, Subaru would not comment on the vehicle’s future past the end of 2012.

Although Subaru would not comment, Motor Trend insiders suggest that rising gas prices may have inserted the final nail in the coffin for the Tribeca. Evidently, Subaru executives have been unable to defend the Tribeca’s place in the automaker’s lineup over the past two years. “This average-looking gas-guzzler is no longer economically viable,” said an anonymous source to Motor Trend. The 2012 Subaru Tribeca possesses an EPA-rated 16/21 mpg city/highway, which is below average.

Reports also indicate that Subaru will not issue a replacement for the Tribeca due to the new 2013 XV Crosstrek SUV, a recent addition to the Subaru lineup. Additionally, the Subaru lineup already includes the Outback, Legacy and the upcoming redesigned Forester.

For those interested, the 2012 Tribeca is available in three trims: Premium; Limited and Touring. The vehicle’s pricing starts at $30,595 and goes up to $35,895 for the Touring edition, an all-wheel drive model with traction control, Bluetooth, Navigation System and DVD Player.