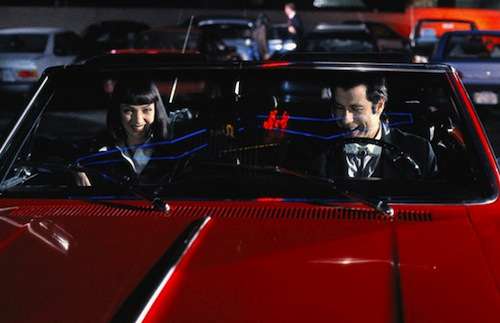 Do you remember the red 1965 Chevy Malibu Super Sport featured in Pulp Fiction? It’s the vehicle that Vincent Vega (John Travolta) uses to transport an overdosed Mia Wallace (Uma Thurman) to his drug dealer’s house. Turns out the classic car – owned by the film’s director Quentin Tarantino – was recovered last week after going missing 17 years ago.

According to TMZ, California law enforcement arrested a man on a separate auto theft charge in Southern California, which led them to the Oakland area, where they found Tarantino’s vehicle. Police report that the VIN number had been changed, but it’s definitely Tarantino’s Chevy. TMZ adds that despite attempts to return the missing vehicle to its owner, cops have failed to get in touch with Tarantino.

The thief in custody will not be charged with stealing Tarantino’s ride. In fact, no one will be arrested for the crime because the statute of limitations on auto theft has expired.

Although Tarantino personally owned the Malibu, the director never rode the classic convertible prior to the start of filming. Interestingly, Tarantino director intended on totaling the car during filming. Tarantino bought the vehicle from a friend with the money he received after selling his True Romance script in 1989. The vehicle was reportedly stolen while parked outside of Tarantino's Los Angeles home 17 years ago.

In addition to the classic 1965 Chevy Malibu, Pulp Fiction featured several other notable vehicles including a $70,000 1992 Acura NSX driven by Winston Wolf (Harvey Keitel). Tarantino had originally intended on Keitel’s character driving a silver Porsche, but later opted for the NSX.

Fans of the film may also remember the custom-designed 1986 Harley-Davidson FXR Super Glide, which Butch (Bruce Willis) uses as his getaway vehicle. The memorable chopper features the name of Tarantino’s then-girlfriend Grace.

Released in 1994, Pulp Fiction is crime film, which was nominated for seven Academy Awards and won one; Tarantino and Roger Avary won for Best Screenplay. Known for its memorable dialogue and nonlinear storyline, Pulp Fiction was a massive critical and commercial success earning over $213 million worldwide. The film revitalized the career of John Travolta, earning him his second Oscar nomination. The film’s co-stars Uma Thurman and Samuel L. Jackson also earned Oscar nods.