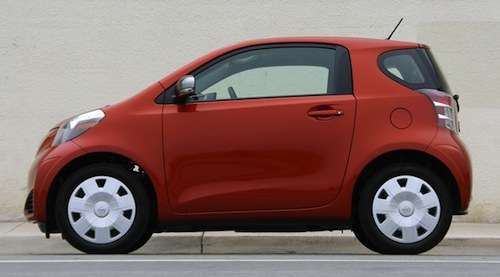 Consumer Reports refuses to mince words in their new review of the 2012 Scion iQ.
Advertisement

If you thought Consumer Reports’ review of the all-new Toyota Prius C was savage, you haven’t seen anything yet. The consumer review site has just taken its first test drive of the 2012 Scion iQ and the results were not good. Consumer Reports managed to take issue with nearly every aspect of the iQ, even several that have been touted as strengths by Scion.

While most reviews praise the iQ for its small size, Consumer Reports found that the vehicle suffered greatly due to its compact size. Granted, parking may be easy in urban settings, but that’s about it. Not only is rear passenger room basically nonexistent, but also front passengers are somewhat hindered. Specifically, Consumer Reports indicated that the pedals are too close to the driver, creating an awkward driving experience.

In addition to critiquing interior room, Consumer Reports was also critical of the iQ’s interior controls and visibility. In regard to visibility, test drivers found it difficult to see out of the vehicle’s back window due to its small size. Control wise, the iQ’s radio had an aftermarket feel to it and contained “poor controls.”

The results were not any better in terms of what’s under the hood. As might be expected, the car’s 1.3-liter engine offers slow acceleration, which made Consumer Reports feel “nervous on the highway.” Overall, the ride experience is “uncomfortable” and quite “noisy.” Drivers might find the iQ’s driving experience a bit “choppy” and unreliable, because it offers very little driver feedback.

Not surprisingly, Consumer Reports did not feel that the Scion iQ was worth its $16,025 price tag, nor was it a “smart choice” for consumers. “For $16,000 you can buy a much more likeable and practical subcompact that still gets impressive fuel economy. So unless you need to squeeze your car into a tiny parking spot everyday, you should really buy something else,” said Jeff Bartlett of Consumer Reports.

Despite Consumer Report’s less than kind review, U.S. News Rankings and Reviews ranks the Scion iQ toward the middle of the pack in terms of affordable small cars. The microcar ranks 23 out of 41 based on 9 published reviews with an overall score of 7.8 out of 10.