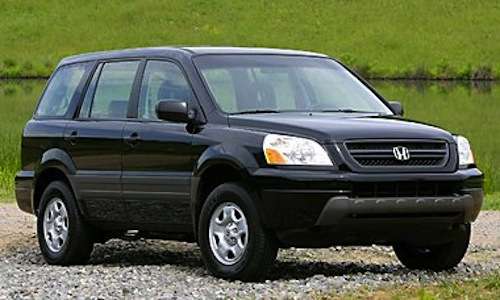 The announcement comes just one week after the government launched a separate investigation concerning the Honda Pilot.
Advertisement

U.S. safety officials have announced they are investigating certain Honda Pilot SUVs due to a dangerous brake problem. The probe includes nearly 88,000 model-year 2005 Pilots. If investigators determine that the issue is serious enough, Honda will be forced to recall affected vehicles, according to the National Highway Traffic Safety Administration.

According to officials, defective brakes may be deployed without the driver stepping on the pedal. Since the investigation is ongoing, the NHTSA has not determined a solution to the problem. However, investigators did state that they are examining the Pilot’s computer controlled system that is supposed to stop the vehicle in emergency situations. Honda says it’s assisting with the NHTSA investigation and launching an independent probe of its own.

There have been no crashes or injuries reported associated with the problem, but numerous complaints have been waged. In fact, Honda and the NHTSA have received 205 complaints regarding the Pilot brake problem.

The government probe began in April after receiving a request from an owner, according to the NHTSA. One Honda Pilot owner reported that his SUV unexpectedly stopped three times, one of which was on a highway. The driver brought his vehicle to the mechanics after each occurrence, but the problem could not be duplicated. However, mechanics did state that faulty brake controls were a likely culprit. “If we continue driving the car, we are scared we may injure ourselves or other drivers,” the driver wrote to the NHTSA.

Friday’s probe comes less than one week after the NHTSA announced a separate Honda Pilot safety investigation due to roll away risks. Last week’s investigation concerned model year 2003 to 2004 Pilot SUVs as well as 2003 to 2004 Honda Odyssey minivans. The federal probe affects more than 577,000 vehicles.

Unlike the brake investigation, there were 16 crashes reported in relation to the roll away probe. In one serious incident, a Honda Odyssey owner was actually run over by his vehicle after putting in it park. The 2003 Odyssey owner suffered a broken leg due to the episode.

Aside from the pair of investigations, Honda also issued a recall last week on model year 2004 to 2005 Honda Pilot SUVs. In total, 820,000 Pilot and model year 2002 to 2003 Honda Civic vehicles were recalled due to headlight failure. Affected vehicles may suffer headlight malfunction while driving, which greatly increases the risk of a crash, according to the NHTSA.

A perennial favorite with families, the Honda Pilot has been a top-selling SUV for the automaker since it was introduced in 2002. Despite its current problems, the Pliot has received countless awards throughout its existence including Car and Driver magazine’s Best Large SUV for 2003 through 2008, Intellichoice’s “Best Value of the Year,” Edmunds.com’s “Most Wanted SUV, AMI Auto World’s “World Family Vehicle of the Year,” and Kelly Blue Book’s “Top 50 Most Popular Cars.”

Stay tuned for more information regarding both NHTSA investigations as each story develops.