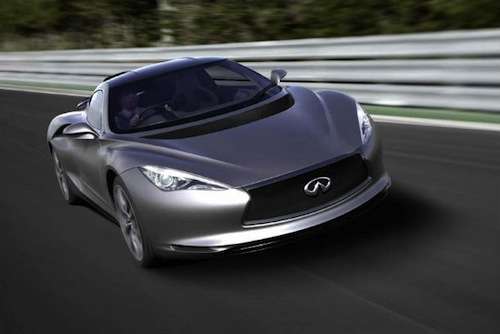 Unfortunately for Infiniti, the event was caught on film by a spectator.
Advertisement

Chances are when Infiniti decided to unveil a working prototype of its Emerg-E plug in hybrid at Goodwood, they actually wanted it to work. Unfortunately for the luxury automaker, their Emerg-E prototype broke down during a routine vehicle-showcasing event in front of a group of spectators. The embarrassing event occurred at the 2012 Goodwood Festival of Speed in West Sussex, England. Adding insult to injury, the entire mishap was caught on film. It’s difficult to gauge the number of individuals in the crowd, but the figure is more or less irrelevant now that the clip has gone viral. Infiniti has yet to comment on the matter, but is surely investigating the incident.

Aside from being an upsetting moment for Infiniti, the event is also discouraging for Lotus, a British automaker. The Emerg-E is based on the Lotus Evora platform, a vehicle that is also appearing at Goodwood. Titled “Past, Present and Future,” this year’s Goodwood Festival features multiple Lotus vehicles showcasing the automaker’s rich history. Clive Chapman, son the Lotus founder Colin Chapman, was also in attendance this year.

Founded in 1993 by the Earl of March, the Goodwood Festival of Speed is an annual hill climb featuring historic motor racing vehicles. Held in the grounds of Goodwood House, the event’s popularity has continuously grown since its inception. Regular attendance typically includes 150,000 visitors over the three-day festival. The Goodwood Festival generally occurs in late June or early July, as to not clash with Le Mans or Formula One races.

The Infinity Emerg-E made its public debut at the 2012 Geneva Motor Show in March. It features two electric motors, which produces a total of 401 bhp. The Emerg-E boasts a 30-mile electric-only range. A three-cylinder gasoline engine kicks in once the 30-mile charge is depleted. The Emerg-E can be plugged in to recharge. The vehicle is capable of going from 0 to 60 in 4 seconds and has a top speed of 130 mph. The “working” prototype shown at Goodwood Festival was a mid-engine two seater, which is not currently slated to go into production. That being said, many of the technologies incorporated into the Emerg-E are expected to be included in future Infiniti models.

The Emerg-E project was partially funded by the Technology Strategy Board (TSB), a UK public body that operates in conjunction with the British government. Nissan UK’s Cranfield technical center, Lola, Amberjack and Xtrac all provided additional funding.