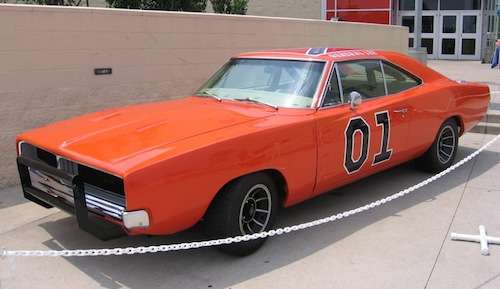 Warner Bros., owner of 'The Dukes of Hazzard' brand, has decided to remove the Confederate flag from all upcoming versions of the General Lee.
Advertisement

One of the most famous TV cars in history is set to receive a makeover in the near future. Warner Bros., the Hollywood studio that owns the rights to The Dukes of Hazzard TV show and movie, has announced it is banning the use of the Confederate flag on the General Lee.

The news first surfaced earlier this week throughout the hobby community, according to Screencrush.com. The Tomy toy company, which makes Dukes of Hazzard memorabilia, told a toy collector on HobbyTalk.com that all future versions of the car would be manufactured without the Confederate flag.

“Starting January 1, 2013 all Dukes of Hazzard General Lee vehicles will not be allowed to be produced with the Confederate Flag on top of the vehicle,” said Tomy.

Aside from affecting toy versions of the car, the ban also prohibits any future TV and/or film version of the General Lee from containing the controversial flag.

According to Screencrush.com, Warner Bros. made the decision in order to distance itself from the flag, because some people may find it offensive.

The original General Lee, which appeared in The Dukes of Hazzard television series, was a 1969 Dodge Charger. The vehicle was driven by the Duke cousins Bo and Luke and is perhaps best remembered for the amazing stunts it performed in each episode. There were 256 General Lee’s used throughout the series from 1979 to 1985.

Although its supporters cite the flag as a symbol of southern independence and heritage, its opponents take issue with the racial connotations sometimes associated with it. In particular, groups such as the Ku Klux Klan and Neo-Nazis have adopted the flag to represent their respective causes.

Where do you stand? Is Warner Bros. making the right decision or is it political correctness gone awry?