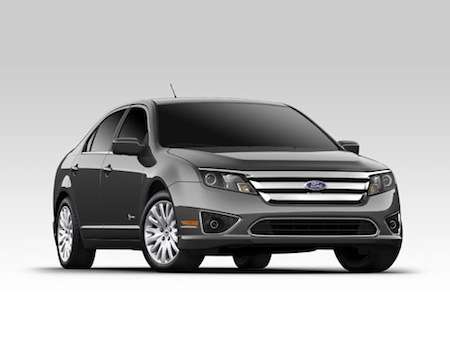 Ford tells Toyota: 'Our hybrids are better than yours'

Despite Toyota's dominance in the hybrid market, Ford believes that their new line of hybrid vehicles are superior in both fuel economy and quality.
Advertisement

Ford has just put Toyota on notice. The Michigan-based automaker is claiming that their new Fusion Hybrid is superior to Toyota’s line of hybrid vehicles. Ford says that the all-new Fusion Hybrid gets better gas mileage than Toyota’s highly touted Camry Hybrid. Ford recently revealed that their Fusion Hybrid will get 47 miles per gallon city and 44 mpg highway, compared to the Camry Hybrid’s 43 mpg city and 39 mpg highway. According to Ford, they have achieved this feat through much research and innovation, including achieving 461 patents.

Although Ford may currently trail Toyota in terms of hybrid popularity, they were the first U.S. manufacturer to sell hybrid vehicles. Introduced in 2004, the Ford Escape Hybrid was not only the first American-made hybrid, but also the first hybrid SUV ever made.

The stakes are high for Ford according to Wes Sherwood, company spokesman. Sherwood estimates that by 2020, hybrid, plug-in and electric vehicles will account for 10 to 25 percent of global auto sales. This reality makes it all the more important for the Fusion Hybrid to be a success when it goes on sale this fall. Ford also plans on releasing the Fusion Energi plug-in hybrid this year. The 2013 Fusion Energi features a plug-in hybrid drivetrain capable of attaining the equivalent of 100 mpg.

Despite Ford’s array of promising vehicles, it will be difficult for the automaker to overtake Toyota in the hybrid market. Toyota, the world's biggest seller of hybrids, currently controls roughly 70 percent of the market. Not to mention, Toyota possesses more than 2,000 hybrid patents, which includes 1,000 for the current Prius model. Toyota’s flagship hybrid, the Prius, is the world’s best-selling hybrid vehicle with worldwide sales topping 3 million units. The Prius hatchback has a fuel economy of 51 mpg city and 48 mpg highway, or 50 mpg combined. These totals are the highest rating amongst all non-rechargeable vehicles.

Check out Ford.com for more information about each of Ford’s hybrid and electric vehicles.

Anonymous wrote on February 17, 2012 - 8:51pm Permalink
I guess you didn't realize that Ford licensed Toyota's hybrid power train for the longest time. Toyota would get royalties on their older outdated hybrid technology from Ford.
Anonymous wrote on July 24, 2012 - 5:55pm Permalink
That's just flat out wrong. Either you already knew that, and just want to slam Ford, or you are making completely ignorant statements. From Wikipedia: "Ford maintains that Ford received no technical assistance from Toyota in developing the hybrid powertrain, but that some hybrid engine technologies developed by Ford independently were found to be similar to technologies previously patented by Toyota, so licenses were obtained." Basically, it was easier and cheaper to license them that to risk being tied up in court. Ford makes a terrific hybrid product that is in most aspects, at least the equal of Toyota.
Anonymous wrote on February 18, 2012 - 5:15am Permalink
Can you actually buy this Fusion hybrid today? No. When can you buy it? Sometime around Fall Will Toyota have kicked your ass by then? You bet
Anonymous or not wrote on February 19, 2012 - 12:24am Permalink
Ford just does things differently..back when Toyota first licensed their H,S.D technology to Ford , Ford had to test it for years before they released it in the Escape. This is after Toyota tested it for years. Make the amount of regen braking configurable on the screen of the Camry put a bigger gas tank in it , and the Camry wins. While your at it make every electronic thing from lights to buzzers configurable on the touch screen.