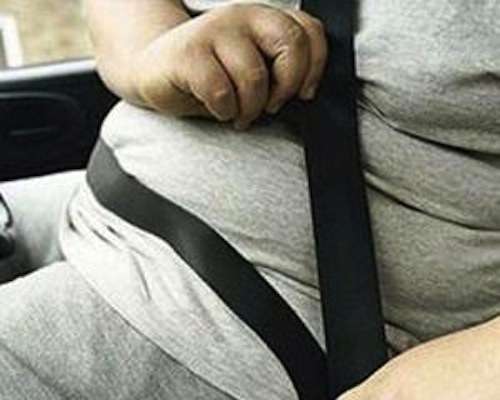 It’s no secret that American automakers are entrenched in a battle to create more fuel efficient vehicles. Not only must automakers meet the consumer’s burgeoning desire to pay less at the gas pump, but they must also consider the federal government’s increasing fuel economy standards. In fact, cars must average 54.5 mpg by 2025, according to new EPA fuel efficiency standards. While this is all well and good, automakers’ plans to increase fuel efficiency are being compounded by a rather large impediment: fat Americans. With this in mind, a new study by Cars.com and Allstate has outlined the “battle of the bulge” for all to see.

The American obesity epidemic has been touted in the news media for years now, but just how does it relate to fuel efficiency? The increased passenger weight in automobiles is having a major impact on fuel efficiency, according to the study. The research cites that 39 million gallons of fuel are used per year for every pound added on in passenger weight.

As America’s waistline has increased, so have federal fuel efficiency standards. Corporate Average Fuel Economy (CAFE) regulations were originally enacted in 1975 to boost fuel economy in cars and light trucks. Although the current CAFE regulation require car and truck fuel economy to be 32.8 and 25.2 mpg respectively, this number balloons to 54.5 mpg in 2025.

One major way in which automakers are trying to increase mpg is by decreasing lbs. Each 100 pounds shed from a vehicle’s weight translates into as much as a 2 percent cut in mpg, which equals one fewer mile per gallon. In order to shed vehicle weight automakers have employed the use of lightweight aluminum and high-strength steel opposed to heavier traditional steel.

Although carmakers continue to think up news ways in which to decrease vehicle weight, they cannot control the weight of its drivers. The study concludes by stating that carmakers must continue to discover innovative ways to “tip the scale” in its favor. Unfortunately, automakers face the unknown factor of whether U.S. obesity will continue to trend upwards, says the study. However, putting their money on “fat” appears to be a safe bet for American automakers based on the current CDC data.

Nicolas Zart wrote on October 3, 2012 - 12:36pm Permalink
Excellent piece Anthony. It's sad, I just saw the latest numbers here in Long Beach, California, 42.7% overweight to obese. And that's in California! If you take into consideration security features, heavier humans and the frenetic race to make engines more gas frugal, it's no wonder our car market is in the shape it's in. Maybe the auto industry could side up with vegetarians and vegans :) My wife is vegan and I'm a vegetarian. I eat as much as I want and don't put on the pounds, so does she.