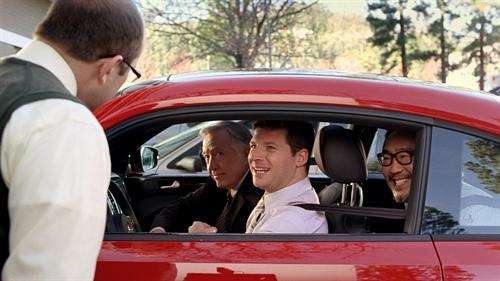 Despite its 'Get In Get Happy' slogan, two prominent journalists have accused Volkswagen's newly released Super Bowl XLVII commercial of being racist, one even comparing it to a minstrel show.
Advertisement

Coming off the heals of last year’s hugely popular Super Bowl commercial “The Dog Strikes Back,” Volkswagen has just unveiled its much anticipated Game Day commercial “Get Happy.” Although the ad’s teaser, which was released last week, earned praise for its propensity to turn frowns upside down, today’s 60-second commercial has raised eyebrows.

As part of its new “Get in Get Happy” campaign, Volkswagen’s Super Bowl XLVII ad features a man who using a Caribbean accent to brighten up his dreary office workplace. The office worker’s positive vibes are contagious, as his boss and fellow co-worker proceed to employ fake Caribbean accents as well. The commercial also enlists the help of Rock and Roll Hall of Famer Jimmy Cliff, who sings a new version of the Partridge Family’s “C’Mon Get Happy.” Based on the description, the commercial couldn’t appear more harmless right? Well, not according to two prominent national journalists.

Shortly following the ad’s release, Jamaican-born American journalist Christopher John Farley wrote an op-ed on Wall Street Journal’s “Speakeasy” blog questioning whether Volkswagen’s commercial is the Jar Jar Binks of 2013. Farley is of course referencing the alien character from Star Wars Episode I who spoke in broken-English, with a faux Caribbean accent for comedic effect.

Farley also took to CNN to criticize the ad earlier today on an episode of CNN’s Starting Point with Soledad O’Brien. During a round table discussion, Farley questioned Tim Mahoney, executive vice president and chief marketing officer for Volkswagen of America, asking him whether VW testing the ad with Jamaicans to determine what they thought of the ad. Mahoney defended the commercial essentially stating that it was a collaborate effort that involved a Jamaican focus group, voice coaches and Jamaican performer Jimmy Cliff. Simply put, Mahoney stated that the commercial is designed to brighten the viewer’s day.

Despite Mahoney’s defense, CNN correspondent and New York Times columnist Charles Blow took Farley’s criticism one-step further. “I don’t like it all,” said Blow. “It’s like blackface with voices. I don’t like that.”

What do you think of Volkswagen’s “Get Happy” ad? Is it veiled racism or just a harmless commercial?

LG's New EV Battery Plant Is a Welcome News for Tesla
Tesla Giga Berlin's New Hurdle: It's Not Only the Gov't, but Now Tesla Itself
END_OF_DOCUMENT_TOKEN_TO_BE_REPLACED