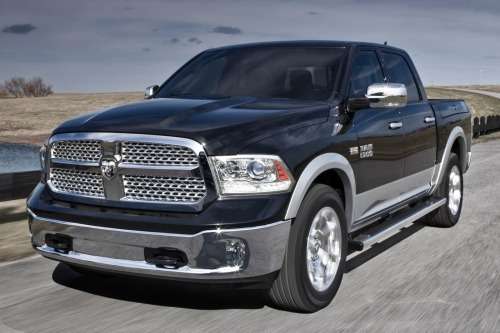 Chrysler is recalling certain 2013 Ram 1500 pickups due to a software issue that affects the vehicle’s Electronic Stability Control system.
Advertisement

Chrysler’s latest recall affects 45,961 model year 2013 Ram 1500 4x4 pickup trucks built between June 26, 2012 and February 5, 2013. The vehicles in question may suffer from a dangerous software glitch, which may disable the vehicle’s Electronic Stability Control (ESC) module when the vehicle is running. Not surprisingly, a disabled ESC system could result in loss of directional control, increasing the chance of a crash, according to the National Highway Traffic Safety Administration.

Chrysler first became aware of the problem in February after receiving a small number of warranty claims regarding ESC light illumination in 2013 Ram trucks. During its investigation, Chrysler identified nine field reports indicating ESC failure. No accidents or injuries have been reported in relation to the software error, according to Chrysler spokesman Eric Mayne.

If the ESC Off light illuminates, owners should recognize that trying to manually turn it back on may not reactivate the system. With that in mind, owners should drive with caution because a disabled ESC system cannot detect or prevent skidding.

The automaker will begin notifying 2013 Ram 1500 owners of the recall next month. Authorized dealers will update the ESC module software at no cost to the driver. In the meantime, owners may contact Chrysler at 1-800-247-9753. Chrysler’s recall campaign number is N37. Concerned drivers may also contact the National Highway Traffic Safety Administration’s Vehicle Safety Hotline at 1-888-327-4236 or go to www.safercar.gov. The NHTSA campaign number is 13V287000.

Chrysler will reimburse any owners that incurred out of pocket expenses repairing the ESC problem. The automaker just asks that owners prove their expenses via a receipt or other adequate proof of payment.

The 2013 Ram 1500 was involved in another recall last month concerning an exterior lighting problem that may lead to turn signal malfunction. As a result, the faulty turn signal cannot notify other drivers when the vehicle is turning, increasing the risk of a crash. Chrysler has already begun notifying owners of the recall, which also includes Ram 2500 and 3500 truck. In total, 30,197 are affected. There have been no accidents or injuries reported due to the defect, according to Chrysler.

Despite a pair of recalls, the news isn’t all bad for Chrysler. Earlier this week, Consumer Reports named the 2013 Ram 1500 its top pick for full-size pickup.