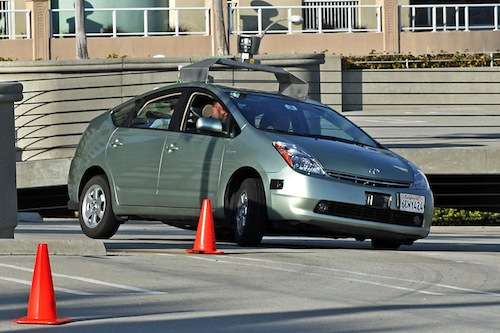 The newly signed legislation lays the foundation for the legalization of driverless vehicles in California.
Advertisement

In a major victory for advocates of autonomous cars, California Governor Jerry Brown has signed legislation laying the groundwork for driverless cars in the Golden State. The bill, sponsored by Democratic Senator Alex Padilla, helps to establish safety and performance guidelines to test and drive autonomous cars on California roadways. The new legislation also paves the way for future laws that will ultimately legalize autonomous cars for public use.

Under the bill, the California Department of Motor Vehicles is required to draft autonomous vehicle regulations by Jan. 1, 2015. Current state law does not include autonomous cars because the technology is so new. The new parameters would allow for driverless vehicles on the road, as long as a licensed driver sits behind the wheel in case of emergency.

Gov. Brown signed the bill at the Mountain View of Google Inc., which has been a forerunner in autonomous car technology. The company’s autonomous lineup currently includes 12 computer-operated vehicles, which are primarily Toyota Priuses. This fleet has driven more than 300,000 miles without a single accident. Such cars utilize computers and sensors to operate autonomously, but a human driver can always override the system.

Although autonomous vehicles once seemed like science fiction, the technology seems practical in our ever-evolving technological landscape. Driverless cars may even make the roadways safer since nearly all accidents are caused by human error. Not to mention that human drivers have become significantly more distracted in recent years due to cell phones.

While computer-controlled autonomous vehicles may be a recent idea, automakers have been dabbling with driverless features for a century now. In fact, the Peerless Motor Company used speed control courtesy of a centrifugal governor as early as the 1910s. Aside from cruise control, recent innovations have included self-parking and lane-departure warnings.

Although California has been at the forefront of automotive technology, the first law authorizing driverless cars was passed in Nevada in June 2011. In fact, Nevada was the first jurisdiction in the world to legalize autonomous cars on public roads. The law went into effect on March 1, 2012. Florida, Hawaii and Oklahoma are also mulling over legalizing autonomous vehicles.

John Goreham wrote on September 27, 2012 - 7:14pm Permalink
Will we be able to send the car to run itself through the car wash? How about to go get the oil changed? Why not?