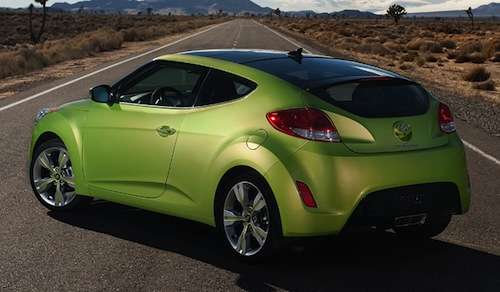 Hyundai has announced it is recalling certain model-year 2012 Hyundai Veloster vehicles equipped with panoramic sunroofs, due to a manufacturer assembly problem. Affected models may contain panoramic sunroofs that may have been weakened during the installation process, which may lead to the panoramic glass panel breaking while the vehicle is in motion. Such an occurrence may lead to personal injury or a vehicle crash. The recall concerns 13,500 Veloster models that were manufactured from November 1, 2011 through April 17, 2012.

The automaker will begin notifying customers of the recall starting next month. Owners of affected Hyundai Veloster vehicles will receive replacement sunroof glass assembly, free of charge. In the meantime, owners may contact Hyundai at 1-800-633-5151. Concerned drivers may also contact the National Highway Traffic Safety Administration at 1-888-327-4236 or visit www.safercar.gov. The NHTSA Campaign ID No. is 12V568000 and the NHTSA Action Number is PE12027.

Wednesday’s recall is the result of an investigation launched by the National Highway Traffic Safety Administration in October. The government probe began after numerous Hyundai Veloster customers complained that their vehicle’s sunroof spontaneously exploded. In fact, there were 15 complaints filed in the NHTSA database in which drivers stated they heard a loud noise, which was followed by a downpouring of shattered glass. All instances happened on new vehicles with 3,000 miles or less.

In once case, a woman’s sunroof shattered while driving home after receiving her first oil change and tire rotation.

"All of the sudden there was a loud bang like a gunshot, and I heard something raining down on my car," wrote the woman to the NHTSA. "I looked in the mirror and saw glass flying everywhere... The glass was in my hair, down the back of my shirt and my pants."

Two Hyundai Veloster drivers explained that their sunroof exploded while their car was parked. One owner wrote that his vehicle’s sunroof shattered while he was washing his car in his driveway. The shattered glass proceeded to fly as much as six feet away from the vehicle, according to the owner.

Introduced in 2011, the Hyundai Veloster is a compact four-door hatchback car, available in manual and automatic transmission. Unlike its competitors, the Veloster features an asymmetrical door configuration: one large driver’s side door and two on the passenger’s side. The Veloster sport compact made its debut at the 2011 Detrit Auto Show. It is the successor to the Hyundai Tiburon, which was discontinued in 2008.