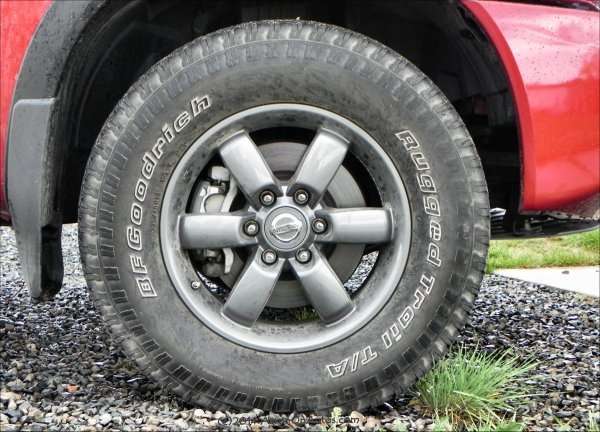 During an automotive press event this week, we had the chance to corner some Nissan representatives and ask the burning question: will the new diesel-powered Titan have dual wheels on the rear axle and is a half-ton "plus" the plan?
Advertisement

This week was the Rocky Mountain Driving Experience, an event where the automotive press of the Rocky Mountain region converge with manufacturers and their cars in a two-day extravaganza of driving through the mountains and countryside of Northern Colorado and putting vehicles to the test on a GT-style race track in the plains outside of Denver.

For their part, Nissan brought the high-selling 2014 Altima, the Frontier offroad powerhouse, the family-friendly Nissan Rogue and the fun little Juke NISMO. Although both days were a blast and got us into many vehicles from many manufacturers as well as one-on-one time with company representatives and product experts, for the question at hand, it culminated in a quiet invitation to dinner with Nissan after it was over.

Over the meal and the conversation, I asked those present what they thought of the upcoming Titan diesel, with its 550 lb-ft of torque output on a half-ton frame. We'd discussed this before, of course, and know that the market for this beast of a Cummins-powered pickup will be mainly those who tow trailers and don't necessarily need the robust carrying capacity of a heavy-duty truck. Just the pulling power those trucks often offer. Given that, an obvious question comes forward: will there be a dually axle offered?

After all, trailering heavy weights often means sway - sometimes a lot of it. Although dual tires on either side of the truck offer more weight-bearing, they also offer significant trailer sway control as well. For most who tow, that's the primary reason to have a dually. With the massive capacity of the Cummins Titan, which will unveil at the Detroit show in a few months, a dual tire option seems obvious.

There were no definitive answers from the Nissan representatives present. There wasn't a "no" either, though. The general answer was "I don't believe anything like that has been announced yet." Those of us in attendance who pay attention to such matters, however, namely journalists who are truck-aware, were in agreement that a dually option was obvious.

That option, were it offered, we believe would likely be in a 1/2-ton "plus" configuration - given the torque and torsion involved in putting to work a growling V8 diesel like Cummins is making for the next Titan. A slightly heavier frame, more robust rear axle and differential, and so forth almost seems like an engineering requirement. Again, Nissan had no official comment. One reporter pondered what Toyota and Ram would do as a response to such a configuration from Nissan, should this new Titan begin selling well and cut into the heavy-duty market.

Interesting questions that we'll keep posing to Nissan until we get answers.

Tim wrote on June 29, 2014 - 7:07am Permalink
I wonder if Nissan truly knows what they have. The large Cummins engine was panned by all the other manufactures because it was too large and too robust for the market. With that much power (and, presumably, poor fuel economy), Nissan has to build a different marketing message with it. Offering it simply as an engine choice in a stock half-ton doesn't seem to add up. I don't see Nissan dropping the ball on this tremendous opportunity, yet, it is a bit surprising that the company representatives don't have a lot to offer besides; "Hey, we are getting a Cummins diesel!"
bob wrote on July 30, 2014 - 10:07pm Permalink
I wonder what the payload in the bed will be for a single axle set up. I was all set to get an Ram 1500 ED but while I don't drive a lot (hence mileage is not a big deal) I do plan on carrying heavy payload with occasional towing and the Titan Cummins seemed perfect.
Edward Reed wrote on October 29, 2016 - 2:18am Permalink
I'am looking to buy a truck for pulling a fith wheel rv, is a dually needed ? If not , what size deisel is needed to safely pull them in the mountains?
Bryan Escott wrote on November 20, 2016 - 1:50am Permalink
The dully market would be a smart opportunity to cut into the other manufacturers profits. The dully would handle so much better than your standard pickup, it by far has more advantages, also have a optional transmission package with a standard 6 speed or automatic, love dully trucks.