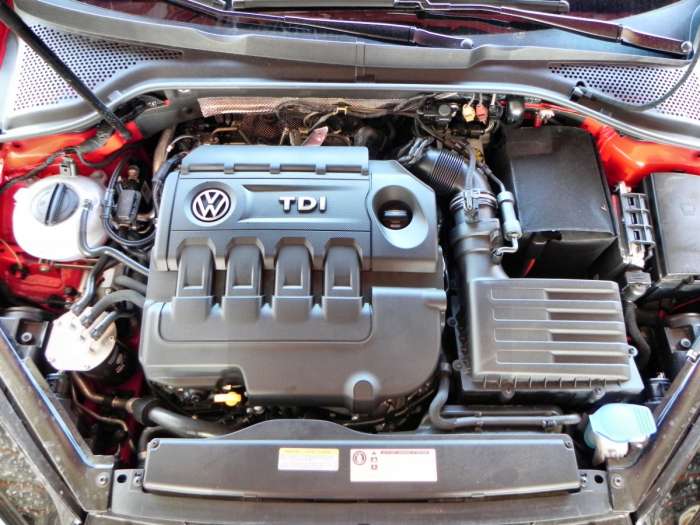 The investigation and very likely recall of Volkswagen and Audi diesel vehicles, which is likely to go global at this point, is all about tailpipe emissions. TDI owners have little stake in that game and no reason to be unhappy about what VW seems to have done to cheat emissions tests.
Advertisement

The scandal broke over the weekend after the Environmental Protection Agency announced Friday afternoon that they were investigating Volkswagen for cheating emissions testing. The announcement came too late in the day for VW to have a weekday response, with their relatively canned "we are cooperating with investigators" response coming over the weekend. By the time the planned unveil of the new VW Passat happened on Monday, the story of Volkswagen and Audi cars cheating EPA tests had broken wide.

Speculation is heavy, of course, with outlets claiming that VW has fully admitted to the cheat, fired its CEO, eaten more broccoli than might be healthy, and whatever else. Some of it might be based on truth, some of it not so much. The scandal, however, is not about what we've so far been told to think.

For the average buyer of a diesel car, the whole thing means little. At least for now. If and when those recalls begin, it will become an issue, but given the primary reason for buying a diesel car, it's doubtful that most owners can rightfully feel "cheated."

Why? Because anyone who tells you that they bought their diesel car because of its ultra-low emissions is full of it. They bought the car because it returns high miles per gallon without sacrificing performance. Period. Something that, until recently, no hybrid could truly claim.

My reasons for wanting to own a TDI, which have not yet come to fruition, were purely economic. Where I live, we drive a lot of highways at speed. Diesel's sweet spot. I want the 40+ MPG that a diesel car can promise in that scenario. Most consumers agree with me.

Looking through forums and commentary on various VW news stories, my claim is substantiated. There are even diesel vehicle owners who bypass emissions requirements on their vehicles specifically to boost MPG because that's what they truly want. Legal? Probably not. An illustration of the consumer mindset? Definitely.

When (at this point, "if" is an underdog) VW does issue a recall for certain vehicles, the fix is very likely to cut into fuel efficiency. Many have estimated about half a million recalls are likely, but the actual number is probably going to be far lower. More vehicles from VW and Audi are equipped with urea after-treatment than most estimates are accounting for. The engine pictured above is from a Golf Sportwagen TDI of this model year and it was equipped with AdBlue, the VW Group's aftertreatment system. So was the Passat TDI I drove in 2013 when I first got a chance at a long term diesel car test drive. The majority of the estimates I've seen that reach that 500,000 vehicle number are assuming that most small-displacement TDI engines sold in the U.S. do not have aftertreatment.

Why You Should Really Be Angry - and at Whom
Since consumers don't tend to buy based on altruistic "cleaner" reasoning, the outrage here should be focused instead on two things: that VW cheated the system and that the system didn't notice for a full seven years.

This means the failure was not just inside Volkswagen. Although no one seems to be pointing this out, yet, much of the blame should also be placed on the government agencies around the globe who are supposedly the watchdogs here. They were asleep at their posts.

We can be sure that the play will be that "clever engineers" who "built software to bypass the system" are to blame and that regulators "couldn't have easily spotted it." The reality is that the regulators built a system that was cheat-able (as all systems are) and don't appear to have bothered running scenarios in that system to find potential weak spots that could be exploited. Were this kind of exploit found in Windows or on an iPhone, the blame would be squarely on Microsoft or Apple rather than on those who created the cheat.

This is not to condone the cheating, of course, as it affects all of us. Diesel cars are likely now doomed in terms of sales in the U.S. What was once a comeback for an excellent drivetrain choice has now likely been destroyed and we can expect to see other makes, especially European ones, pulling their diesel models in the coming years as sales for them plummet. Were we of a conspiranoid bent, we might even point to VW's avowed electric vehicle and clean production work as further proof that this was a calculated plan to destroy diesel's potential in favor of "Big Electrons."

It may be weeks or months before we really know how big this story is. So far, we know it's having a huge impact on the Volkswagen Group and will very likely translate to dead sales for the year and a lot of costs down the line. We also know that many consumers may find themselves in a difficult situation as their vehicles get recalled or are even forced into retirement (likely if the cost of upgrade is too high). Several states like California will not allow those TDI vehicles to be registered if they have not had the repair work, if any is required, done.

Like other recalls of recent times, such as the Toyota accelerator pedal fiasco and the Takata airbag debacle, this new TDI scam will be hard-hitting on many fronts. Then, like the GM scandals, it will eventually blow over. The aftermath will be that we'll see diesel car sales back to pre-1990 levels, probably for some time, and one of the world's largest automakers will have years of work ahead to rebuild its reputation.

Richard wrote on September 24, 2015 - 6:19pm Permalink
This is probably the first reasonable article on owner's perspective I've seen since this whole mess started. So many places crowing about how owners were betrayed and should be mad about the emissions. I just bought a Passat TDI this year and honestly, I'm not mad about that. What I am mad about is the possibility of a "fix" that lowers power and mpg and the probably damage to resale value down the road.
Aaron Turpen wrote on September 27, 2015 - 11:33pm Permalink
Thanks.
kolibri wrote on November 3, 2015 - 5:48pm Permalink
excellent article. 7 years to discover the cheating well I read that the EPA knew about the cheating for years now and so did the EU. VW got cot and so did the EPA and that is why there will not be any criminal charges, just a big fine.
Robert Evans wrote on September 27, 2015 - 1:34pm Permalink
"Were this kind of exploit found in Windows or on an iPhone, the blame would be squarely on Microsoft or Apple rather than on those who created the cheat. " This analogy is full of it. The appropriate analogy would be comparing computer reviewers to Dell/HP/Apple/(MS on the Surface Pro) paralleling EPA/Consumer Reports/Etc... to VW. It would be as if Dell or HP had added special software that would cheat the standard benchmark programs which PC reviewers use to evaluate computers.
Aaron Turpen wrote on September 27, 2015 - 11:32pm Permalink
I fail to see how that is "full of it." Consumers expect the EPA to catch people cheating and/or causing emissions that are against the law. Just as we expect Microsoft/Apple to keep their OSs secure. When they aren't, the news and forums tend to blame not the hacker, but the OS' failure. Yet here, instead of blaming the watchdog that clearly failed, we blame the company that did the cheating. In my article, I made it clear that we should be blaming BOTH.
Mark Bailey wrote on January 13, 2016 - 2:58pm Permalink
The Passat and other AdBlue equipped VWs are identified as violators. Presumably these cars can be fixed by changes that consume more AdBlue. Why this would result in loss of power or mileage does not seem to make sense. Perhaps VW will also have to limit fuel delivery at the same time? Was VW trying to save money on AdBlue top ups under its included new car service plan? Was VW trying to deliver a car that provided satisfying fuel economy and AdBlue refill intervals? How does BMW manage to make 2 liter diesels with so much greater performance than VW while still complying with the law?