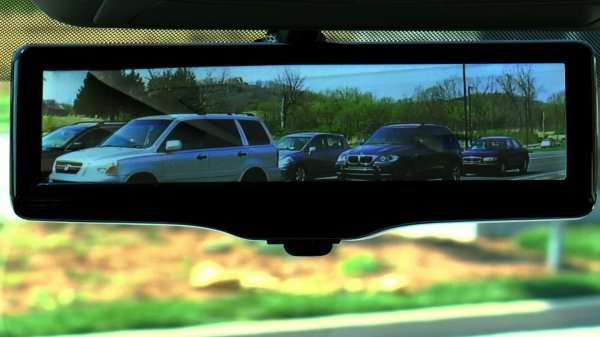 Nissan has created a rear view mirror system that changes everything, including a smart way to circumvent outdated United States law.
Advertisement

Nissan has debuted a new rear view mirror system that utilizes cameras to enhance the view behind the car. The system is very intelligent and aptly named the Smart Rearview and is on display for demonstrations at the New York International Auto Show right now.

So what is this system and how does it circumvent outdated U.S. law?

The mirror itself is a combination of a standard rear view mirror, of the size required by federal law in a vehicle the size of the new 2014 Nissan Rogue (in which it's been fitted for demonstration) and a rear-facing camera specially-mounted to mimic the view the mirror normally gives the driver when properly positioned. The mirror can be used in either of two modes: regular mirror and enhanced camera mirror.

As a regular mirror, it's no different than any other rear view mirror positioned at the center of the vehicle so the driver can see through the back window. As an enhanced mirror, however, the hidden LCD that makes up the mirror's glass activates and replaces the mirror surface with a view from the rear-facing camera mounted near the top of the back glass, positioned to give the same view the mirror would give were it merely reflecting.

The whole thing, as well as some of its advanced technologies for better view, is explained in this two and a half minute video from Nissan.

So how does this flaunt U.S. law?

Simple. In a classic case of finding a solution despite outdated regulation, Nissan's Smart Rearview complies with current federal requirements yet still offers the advanced technology they're after.

Current NHTSA law for automotive manufacture requires that mirrors of specific sizes and magnification be placed within vehicles at specific points: namely one on either door, where we're used to seeing the side mirrors, and one at the top-center of the windscreen (where the rear view mirror normally is). Automakers have been lobbying to have this law changed for some time now, hoping to replace those mirrors with camera systems that are cheaper, less prone to breakage, and, more importantly, more conducive to slipstream aerodynamics for better fuel economy. So far, regulators haven't budged.

Obstacles don't have to be overcome, they can be side-stepped. Thus Nissan has decided to go around the regulations instead of through them.

The funny thing is, the United States isn't the only country whose regulations are out of date and blocking the implementation of rear view cameras that replace mirrors. Europe has the same issue, as do some parts of Asia. Nissan's workaround is getting around the laws of all of those jurisdictions.

This system is the obvious next step in the move from assist systems like radar and parking cameras and should be an obvious use of rear backup cameras that are already so ubiquitous on today's production vehicles (and that will be mandated in the next few years). It's brilliant.

Lindsay wrote on April 20, 2014 - 7:33am Permalink
I think you mean "flout", not "flaunt".
Mike wrote on August 18, 2015 - 12:59pm Permalink
Exactly. The deluge of bad punctuation, misspelling, inapt vocabulary, and syntax errors that is showing up in news stories across all media these days is truly frightening. It indicates a new generation of journalists whose own educations in English usage were not up to snuff, and it promises to reinforce the propagation of bad grammar into ensuing generations. There once was a time when English had little standardization, and business nevertheless seemed to get done. Just read some of the writings of the highly-educated and brilliant government administrator Thomas Cromwell. At least, though, his meaning could be discerned, even by a modern reader over four centuries later. In today's "journalism", however, there have actually been times when I could not decipher the point the author was trying to make, making the attempt to inform through the written word rather pointless.
Lindamh wrote on November 11, 2014 - 5:36pm Permalink
I use a wide-angle rear-view mirror. I can see the side windows as well as the back. The only down side is it won't change for night and I get lots of glare.
Dave J wrote on August 4, 2015 - 11:57pm Permalink
I use my $100.00 wireless backup camera system for auxiliary rear vision but instead of hooking it up to the backup lights I control it from a switch in the truck.
cyman wrote on August 19, 2015 - 12:30am Permalink
This is old news really 2 of my travel trailers were installed (by me) with always on rear view cameras with sound for over a decade. It make towing much more safe backing with these up could save lives even. And on motor homes these days it's standard equipment.Don't see a problem at all.
imajoebob wrote on November 25, 2015 - 11:44am Permalink
Exactly how is an electronic system threaded through the car, including through the headliner, attached to a viewscreen and camera at opposite ends, with software and hardware to process and display multiple, enhanced images onto the screen, light enough to adhere to the windscreen and not suffer excessive vibration (either viewing or wear and tear) CHEAPER than a piece of glass with foil painted on the back and a second polarized piece of glass laid on top of it?
kris wrote on March 19, 2016 - 1:18pm Permalink
Improved aerodynamics. No side mirrors creating drag, hurtting fuel economy. Before any of you naysayers speak up, based solely on opinion and ungrounded statements, let me add my personal experience-based facts. I own a 2003 Chevy Silverado 2500 HD with the 6.6L Lb7 Duramax coupled to a 5 speed OD Allison 1000 transmission. Also it is a crew cab, with the LS trim package, Fully dressed out, crossover box, bed cover, flip over gooseneck hitch, onboard air including two 5 gallon tanks and air bags on the rear axle, two inch lift and 33x12.5x18" Truxus Super Swampers, it weighs just over 10,000 pounds. The only performance mod that I run is a Bully Dog triple pup tuner - set on performance. Power train output is roughly 430-450 H.P. With the factory electric folding mirrors (no extending tow mirrors), I would get 23-24 MPG. WITH a windshield visor. After owning imy truck a couple years, it occurred to me, that on the highway I could use the electric fold function of those mirrors, thereby reducing my drag coeffient, and increasing fuel economy to almost 26 MPG. Should I need the mirrors, I simply pushed one button, and there they were. Let me state here that my stated fuel economy is NEVER based on the bullshit seen on the DIC in the dash. I use old school calculations from my (properly callibrated) trip odometer, and fuel receipt total gallons. I finally got around to removing those outside mirrors completely, replacing them both with 1/2" diameter x 1" long cameras mounted in what was the base of those mirrors (1" thick, extending 4" out from the door skin). Those cameras are wired to two 4" led displays that are mounted from the overhead console and posisioned on either side of my center rearview mirror. So I now need only look to one single point to see the 3 different perspectives to the side/rear of my truck. I have lost no functionality in view or safety, and gained another 2 MPG, again, at 75 MPG. I doubt anyone can beat that 28 MPG in a vehicle weighing NO LESS than 10,000 LBS (5 TONS). So yes, Nissan's smart mirror IS a big deal. Also, though it may be fancier than mine, it costs more, came two years later, and does not include side rear view. I also ditched the head unit radio, hacked the OnStar module and connected it to the laptop motherboard I hid inside the dash. I run Debian Linux on that "carputer" for hands free navigation (using the hacked OnStar hardware), hands free text and calls, and hands free infotainment for the front and rear of the crew cab. The specifics on the many "goodie" tech hacks I have incorporated into my BELOVED truck are enough to fill a Q&A blog/forum. Suffice it to say that my B.S.in Computer Science and innovative nature have served my truck, my passengers, and me very well. What do you get for fuel economy in what you drive, and how much does it weigh? I guarantee you cannot drive 3000 miles cheaper than I can, unless you are in a vehicle that probably would fit in the back of my truck, and I'd still beat 20 MPG.