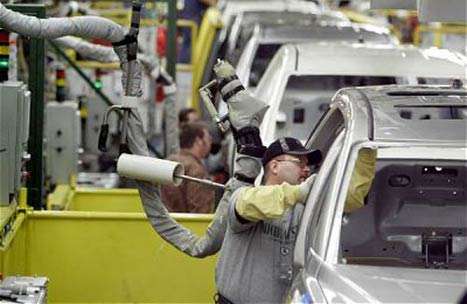 Who's the Most 'American' Automaker?

The latest numbers are in and according to the National Highway Traffic Safety Administration (NHTSA), the most American-made car for 2012 is the Toyota Avalon. Although that grabbed headlines, it was only one model. What about the industry as a whole?
Advertisement

The automotive industry is a many-headed beast. A car begins as base materials, which are then made into components, which are then assembled in a factory, and then taken to a dealership where they are sold to the consumer. Each of these steps means at least one job.

There are people working directly for the automakers themselves, plus those working for suppliers, plus those working in the towns and cities around the plants whose economies depend on the manufacturing jobs, etc. Estimates from The Level Field Institute, an analysis firm, say that for every employee working directly at an auto manufacturing plant, nine other Americans are employed in support jobs. Obviously, the number of American jobs dependent on automaking are not easily counted.

Beyond that, there is also the question of which automaker makes the most of their American-sold cars here in the U.S., which one sells more cars than the others, and other metrics. Clearly we can't just say "this car is the most Made in America auto out there." There's more to it than that.

We live in a global economy and few industries are as globalized as auto manufacturing. General Motors' Buick brand, for example, sells more cars in China than it does in the U.S. Chrysler, by contrast, only builds one model in the U.S. (the 200), the rest are made elsewhere. Fisker, much-maligned by the Republicans, is actually more American-made than are many of the Detroit 3's machines.

Going through all of these numbers, it becomes apparent that judging an automaker by only one metric to make it "Most American" is not exactly accurate. For example, here are the top five most American-made cars for 2012, according to NHTSA numbers:

That's only the beginning, though. It doesn't say everything. Next, we can look at which automakers build the most models in the U.S. Consumer Reports released a list in 2011 that puts General Motors (including all nameplates) at 27, Ford at 14, Chrysler at 12, Honda at 10, Toyota at 9, and Nissan at 7. If you remove re-badged vehicles from the pool (i.e. a GMC 3500 and Chevrolet 3500), then the list shortens somewhat to make GM and Ford closer at 17 and 12, Chrysler at 9, Honda at 9, and Toyota and Nissan still at 9 and 7 respectively. For those wondering, a total of 101 models of vehicle are built in the U.S. overall.

That still doesn't paint a complete picture. So we have to ask how many people are at least directly employed by the auto manufacturers operating in this country. For that, we turn to Bureau of Labor Statistics, which says a total of 770,000 Americans work in the auto building business (seasonally adjusted, 2011 numbers). That's down from over 1 million before the 2008 recession began and it doesn't include those who sell cars, only those who are directly involved in making them. Car selling is another 1.1 million people with jobs.

Breaking down those BLS numbers isn't easy, since the government doesn't include which manufacturers are employing Americans and how many. For that, we have to turn to numbers released by the various automakers themselves, the latest of which are also from 2011.

In auto building itself, the Detroit boys each employ more Americans than do any other automaker, though the numbers are cutting close for Chrysler. General Motors leads the pack at 77,000 employees, then comes Ford at 65,000, then Chrysler at 39,200. Toyota is at 30,000 and Honda has 26,000, while Hyundai-Kia employs 7,800. Most of these jobs are in Michigan, which has around 136,400 auto workers with Ohio as a distant second at about half that.

Now we have three metrics by which to compare "American Made" labels to our cars. Our last set of numbers is simple: who owns the largest shares of the American automotive market in sales volume? For that, we turn to the Wall Street Journal whose automotive section keeps a running tally, month-by-month for 12 months. There, we see that General Motors, Ford, Toyota, Chrysler, and Honda are the largest sellers by share (in that order). Over the past twelve months, there has been shuffling in these numbers, but overall, that is the order they tend to stay in. Between them, these five manufacturers hold about half the total U.S. auto sales market.

So, given all of this, what do the numbers tell us about which auto manufacturer is "more American" than the others? Obviously it's General Motors, which has the most number of models, employees, and largest market share. Ford and Toyota are close competitors for second place with Ford having more employees and models being made here, but the two companies are nearly tied for market share and Toyota has more models with high domestic sourcing; though the second spot probably goes to Ford in the end. Chrysler and Honda are close as well, holding about the same market share, and both companies have an equal number of domestically-made models and nearly as many employees.

With time, the trends are becoming clear, though. So-called "foreign" automakers are moving more and more operations to the U.S. as shipping and manufacture overseas becomes more expensive. The natural disasters in Japan last year were a clear sign to some Japanese makers that diversification is a good idea. Further, with Fiat now owning Chrysler, Fiat models will be coming to America and, eventually, may be built here as well.

Still, with all of this, "Buy American" doesn't seem as poignant as it might have a few years ago. The lines are blurring between the Detroit 3 and everyone else.

Update 7/28: Re-tooled the Chrysler number of vehicle models to reflect other Chrysler brands (Dodge, Ram, Jeep) which had been left out before.

Aaron Turpen wrote on May 3, 2013 - 11:59pm Permalink
A reader emailed me with the following question: This is probably the best break down I have ever seen, but two things that everyone keeps out for some reason are: 1. Where is the auto makers corporate headquarters, in what stock market are their shares sold and traded on? Which country benefits from their taxes? and 2. What about all of the jobs on the front end? The jobs in engineering (structural, engine/powertrain, body, interior, etc.) safety, design, testing, management...... You have my e-mail address; I would love to hear back on these two areas. If I were a betting man, I would say that the Detroit three move to 1, 2, and 3 with no problem. To which I replied: Nope. Where headquarters is located means little, as this is merely where the top level (smallest portion) of profits end up. Economically, where the JOBS are is what matters, not where the final profit goes. Remember that for every job created in a U.S. automotive plant, 9 or more jobs are created to supply that job - suppliers, services for the employee, marketing, sales, and so forth. This is why it's far more important to note where the vehicle is being made than it is to worry about where it's corporate HQ is located. Most Toyota design/development for North American sales is done in California. Nissan did most of there's in Tennessee and New York until the opening of their new facility in Silicon Valley, which will take over much of it (they're cutting that NY office down as it's a costly place to do business). Honda designs in Canada and Detroit. All companies selling in the U.S. are incorporated here (hence it's Nissan North America, Honda of America, and so forth) and trade on the New York exchanges. By law, all safety and other testing must be done in the U.S. for U.S. sales, so all manufacturers who sell here do their testing here. Since manufacture here usually involves a lot of North American sourcing for components as well, initial testing of those components is conducted here too.
China Mike wrote on March 20, 2016 - 12:25pm Permalink
American auto manufacturers employ more Americans than the big three Japanese auto makers based in the USA. Enough said. Want the numbers? Here they are: Detroit Three vs. Japanese Three: 181,000 to 67,000 Read it and weep, or cry over your rice if you are a Jap car lover. Want even MORE numbers? HAHA Here ya go: GM employs 77,000 Americans. Chrysler's U.S. employment totals 39,200. Ford employs 65,000. Japanese automakers based in the USA produced 34 percent of the 8.7 million vehicles built in the U.S. Hello? That's barely more than 1/3. Wake up ya commy bastards.