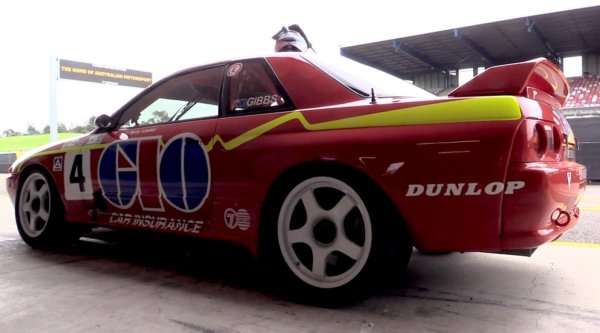 V8 Supercar driver Rick Kelly spent some time with an R32 GT-R on a race track. All of it was caught on camera. Watch. Enjoy. Be jealous.
Advertisement

In Australia, the Nissan NISMO team of V8 Supercar drivers are among the best in the business. One of their driving stars is Rick Kelly, who often dominates the track during Australia's most popular motorsport. But what happens when a driver who's mastered the most modern race cars in the business gets time in an old-school racer like the 25-year-old Skyline GT-R (R32 generation)?

Well, Nissan wanted to find out, so they took an R32 Skyline to the Sydney Motorsport Park and let the former Bathurst 1000 champion spend some quality time with it. It was captured in a series of short films and is now on YouTube. One of which is a complete lap in the car around that world-famous circuit.

The first two-minute video showcases the R32 GT-R and explains why the Skyline was very ahead of its time. Kelly talks about the car's capabilities and getting used to driving it. He was impressed with its modern feel despite being a quarter of a century old. He also says he was both thrilled to drive it and afraid, since it "should be in a museum" for its perfect quality.

In the next one-and-a-half minute video, Kelly compares the old GT-R with the current-generation Nissan GT-R NISMO. He says the older car is a kind of cross between a current V8 supercar and a GT3 car. He believes that this million dollar piece of history would still be competitive in motorsport today.

In this two-and-a-half minute piece, Kelly shows the inside of the car. He notes that the gearbox is not sequential, as they are now, and the cabin layout, which he says is more open than current cars due to the lack of electronics.

Finally, the last video is a raw hotlap in the R32 Skyline. The video is 2:21 and the actual track time is less than two minutes to circuit. An overlay shows Kelly as he shifts and maneuvers while a dashcam captures the forward-facing run around the track. The sound and feel are more than enough to get your adrenaline up.

The series is part of a publicity campaign for the Retro Race series coming up at the Sydney Motorsport Park next weekend.