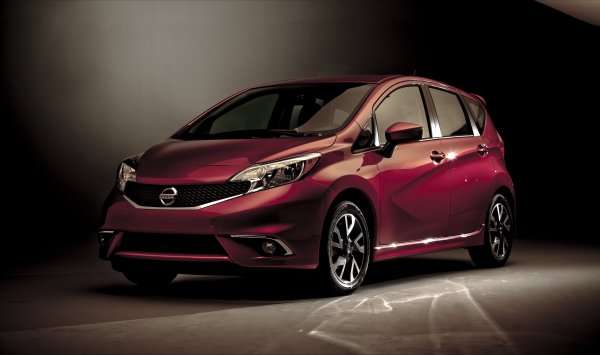 When we think of subcompact cars, we generally don't think the words "stylish," "cool" or "sporty." Yet that's exactly what Nissan wants us to think when viewing the new Versa Note SR. How realistic is that?
Advertisement

In the subcompact car market, there are generally two things that drive sales: low price and high miles per gallon. Most buyers of subcompact cars want both. Nearly every car offered in this segment, from the Nissan Versa to the Ford Fiesta to the Honda Fit, fit these criteria. They sell for about $14,000 and have about 40 mpg on the highway.

So why would anyone buy a premium-level subcompact like the Nissan Versa Note SR?

When the Versa Note SR was introduced earlier this month at the Chicago Auto Show, it was one of a flurry of vehicles on display. We covered the unveiling, of course, and detailed the car (read that here), but otherwise didn't discuss the car in the bustle of the show's many releases.

Now that it's had time to sink in, though, we're wondering why Nissan decided to make the SR. The current 2014 Versa Note sells for about $14,000 at base and around $19,000 at its most premium. So we can assume that the Versa Note SR (which enters the market in the 2015 model year) will sell for at or above $20,000 as the most premium offering in the Versa Note model line. That prices it into small sedan territory.

So who is the market for the 2015 Nissan Versa Note SR? Luxury subcompacts are not great sellers and there are very few of them on offer.

The answer seems to lie in the intended market the Versa Note SR appears to be aiming for. It's a market that we think might be growing faster than many in the industry might realize.

These are the commuters and daily drivers who want a small, fuel efficient car that won't bend the budget. Further, however, they also want that car to be comfortable and stylish. In other words, they're tired of the Fiestas, Sonics, and Versas that are all about fuel efficiency and not much about comfort.

Let's face it, as great as these cars are (and others like them), the subcompact segment is largely made up of cars that offer only base level comfort and amenities. Can you buy the Versa Note with a bunch of bells and whistles and bleeping technology? Sure. Does it come with better seats and more stylish touches to its exterior trim? Nope.

That's where the SR package comes in. It's for the buyer who wants efficiency and enough versatility for everyday solo or tandem driving, but doesn't want the discomfort of the average subcompact. This is a bigger market than we might think. It's also largely made up of women, which is the fastest-growing and now largest consumer demographic in the subcompact and small car segments.

How large is this segment? I suspect we'll find out when the 2015 Nissan Versa Note SR hits showrooms later this year. My prediction is that it's larger than many in the industry might think. Even Nissan may not know what they're about to hook into.

yamez wrote on February 26, 2014 - 4:22pm Permalink
You must not get out much. Sport/luxury subcompacts are very popular, and sell like crazy. Arguing any kind of pessimism toward the Note SR seems fairly uneducated - especially for someone who writes for an autos collumn. Check out figures on the Chevy Sonic RS, Ford Fiesta ST, and most popularly, the Fiat 500 Abarth and Mini Cooper S lines, and you'll quickly gather that the Note SR has nothing but good things to worry about.
Jeremy wrote on March 22, 2014 - 11:32pm Permalink
Why buy a Versa SR for that price, when one could get the Sentra SR for cheaper? Just as roomie and better car