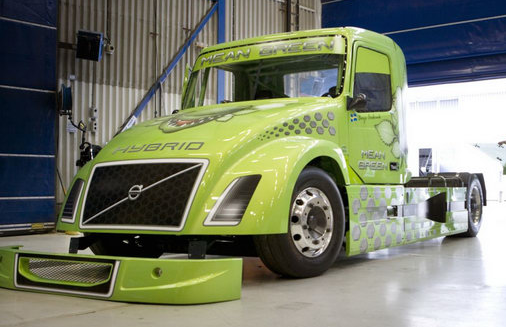 With 16 liters of engine and 149 kilowatts of motor putting out a total of 2,000 horsepower, the Mean Green has already made a huge skid line on the heavy truck drag racing field. Now Boije Overbrink, its driver, wants to shatter the record.. again.
Advertisement

The Mean Green is the world's fastest truck. Its driver, Boije Ovebrink, holds the world's speed record for a standing start run in a regular rig and, as of last year, also holds the Federation Internationale de l'Automobile's speed record for a hybrid. Both records are for the same run, at 152.252 kilometers per hour in a standing 1,000 meter and 115.347km/h in the standing 500 meter. That's not good enough, says Ovebrink.

The Mean Green is a Volvo tricked out for drag racing and sporting a hugely powerful drive train putting out a total of 2,000 horsepower. And it's a hybrid.

Ovebrink formerly held the title in a standard diesel rig, which he called the Wild Viking, before climbing into the Mean Green to topple that record last year. In the odd world of big rig drag racing, the new Volvo hybrid is even odder. After winning the title in 2007, Volvo Truck's CEO asked Ovebrink "what's next?" Ovebrink though it over and proposed a hybrid dragster for competition. So the Mean Green began.

A frame headed for the scrap yard was retrieved and a cab used in a crash test simulation was recovered. The "shaving" began from there, pulling off unneeded parts like first gear, wiring for accessories that no longer existed, etc. Many parts on a dragster big rig are downsized versions of the regular rig's pieces, since suspension and other parts don't need to be as robust as the dragster will not pull weight. Aerodynamics were improved with a new hood line, shaped bumper, and other refinements. Inside, much of the luxury meant for an over the road professional driver is gone, including much of the dash, to lighten the load - a drag racer spends only a few seconds in the seat from setup to finish.

Before the hybrid parts were added, the all-diesel drive train was tested and beat the Viking's world record. That was in 2010 and without the extra horsepower of the motor added in. Once the hybrid components were added, in last year's runs, it shattered the world speed record for by more than 10km/h. It also beat a Ferrari on a quarter mile run:

Some refinements to the Mean Green mean it will almost assuredly do better on this year's circuit. Volvo has pumped it up to 2,100 horsepower (almost 5,000 foot pounds of torque) and improved the aerodynamics of the rig. The aero changes come thanks to a new North American VN cab modified for racing. The Mean Green currently holds the standing 500-meter, standing kilometer, and flying kilometer records.

Here's video of those record-breaking runs: