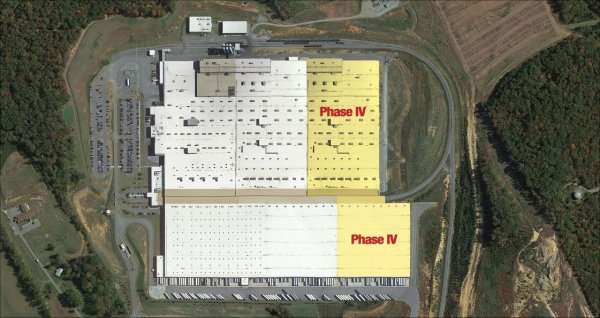 Toyo Tire's White, Georgia facility is going to see an additional 700,000 square feet added to its two million square foot facility plus another 323,000 to its warehouse, adding on jobs in the process.
Advertisement

Toyo Tire North America Manufacturing is expanding its 2,000,000 square foot factory in White, Georgia to add on more than a million square feet of additional factory and warehouse space. The expansion, which broke ground this week, will accommodate increased demand for both Toyo and Nitto brand tires sold in North America. The expansion project will take four years to complete, but will be done in phases so that portions of the new additions will be opened in segments.

Toyo Tire & Rubber is investing $371 million into the Toyo Tire North America expansion as part of the company's proprietary automated production system called ATOM (Advanced Tire Operation Module). The plant rolled its first tire off the line in 2006 with 81 employees and has undergone three expansions already, more than doubling the facility's size and increasing staff to over 1,000 people.

The Toyo facility in Georgia has achieved an ISO 14001:2004 Environmental Management Systems certification this year and on November 27 of this year, the plant produced its 20 millionth tire since its founding.

“We are proud to manufacture tires for North America, on North American soil,” said Jim Hawk, president, Toyo Tire North America Manufacturing, Inc. “This plant, and the people who work in it, play an important role in supporting consumers and our dealers as demand for our products continues to grow. This fourth expansion will help us answer that demand.”