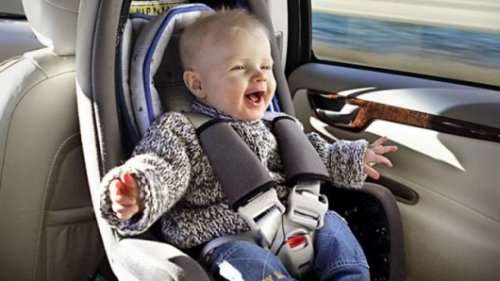 A new study by researchers at the University of Michigan shows that many children are graduated to front-facing car seats too early and many older children are not put in appropriate boosters.
Advertisement

Despite the huge public outreach by government and the insurance industry, a new study shows that many parents are graduating children to bigger car seats too soon or foregoing recommended booster seats altogether, putting their children at risk.

Deaths due to car accidents are the number one killer of children between one and 13 years of age in the United States. The American Journal of Preventative Medicine published a study revealing why many kids are at risk: too few parents are using child safety seats correctly, usually by choosing the wrong one or by not using one at all.

The study found that parents are often graduating children to front-facing seats too early (often being changed at age one, despite National Highway Traffic Safety Administration, NHTSA, recommendations of waiting to age two). Car seat manufacturers are posting both height/weight and age recommendations, as required by NHTSA, but many parents are ignoring them. The study also found that many parents are allowing children as young as age six to ride in the front seat, despite posted warnings in vehicles owner's manuals and sun visors showing the dangers this invites.

Another area of concern were booster seats. Children aged seven and older who are not at minimal height and weight numbers to use a seat belt alone are recommended to be put into booster seats. Quite often, parents ignore this and put children in danger of neck, spinal, and other injuries from inappropriate seat belt placement. Not surprisingly, the study found that parents who do not wear their own seat belts were far less likely to require children to be in booster seats or otherwise secured in the car.

Another area of the study focused on ethnic differences. The ratio of inappropriately secured children was higher in black and Hispanic demographics than it was with whites. Economic differences seemed to have little impact on the proper usage of child restraints, however. The study found that in the youngest children, improper seating restraint was ten times more likely in minority populations as it was in whites.

The American Academy of Pediatrics, which works with the NHTSA in recommending child safety restraints, says that children under the age of two should be kept rear-facing unless they have reached the height-weight limits of their safety seat. The longer children are kept in rear-facing and in five-point harnesses the better. Parents should graduate children to lower levels of restraint at the latest possible time in order to maximize safety by adhering to the height-weight limits of their safety systems. Booster seats should be used until children are at least 57 inches tall, which is the average height of an 11 year old. It's strongly recommended that all children be kept in the rear seats, even up to driving age, as they often offer the best protection for smaller bodies. See seatcheck.org for more information.