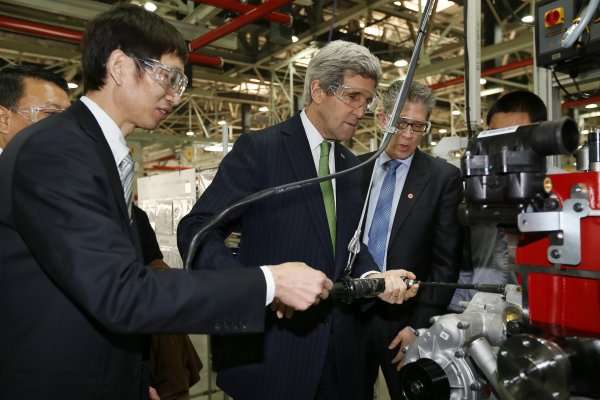 In what could be viewed as checking out the competition or checking up on how our technology transfers are going, depending on your political bent, U.S. Secretary of State John Kerry visited a jointly-owned Cummins diesel engine plant in China.
Advertisement

Politics are a funny thing. Some people think of them as the way to get things done, others as a roadblock towards making things happen. Most agree that politicians themselves are either crooks or back patters - probably both. Whatever your view is, though, it's of note to those of us who follow automotive news that the United States Secretary of State John Kerry, is visiting China and recently toured an engine building plant.

The engines being built are large-displacement diesel engines for heavy-duty applications at a plant that is jointly-owned by Foton Motor and Cummins Engine. Cummins, an American company, penned a deal with Foton to build and operate a heavy-duty engine plant near Beijing for use in Foton's commercial vehicle line.

The engines being made are the Cummins ISG, a diesel offering that meets or exceeds tough emissions standards in Asia, Europe and the Americas. More than 100 U.S. engineers were actively engaged in the development of technologies being used in the engine while cutting-edge U.S.-designed manufacturing equipment makes the build at the Chinese plant possible.

Secretary Kerry toured the plant, along with several other self-import..er.. officials from the U.S. and China, including the U.S. Special Envoy for Climate Change (whatever that is), the Vice Chairman of China National Development and Reform Commission, and the U.S. Ambassador to China (who may have been on his first trip there).

"I just toured this amazing facility, what you have built here is really the blueprint for the businesses of the future. Not only is the facility is modern and clean and state of the art, but the workers are well paid and the benefits are good; and there is collaboration between what happens here and what is happening in the United States." Secretary Kerry commented when addressing to media and plant workers after the tour, "We are not just improving lives by building cleaner engines which you see right here and making it easier for people to breathe; we are not just transforming the way we use and produce energy -- we are also creating jobs and strengthening our economies by moving towards clean energy, clean technology, alternative and renewable fuels."

Your political bent will translate that bit of rhetoric. Kerry then went on to say that the U.S. and China are cooperating more closely on climate change initiatives. His main point? "Innovations depend on governments sending the right signals." That basically sums up his speech. You'll either see that statement as laughable or nod your head in total agreement. Again, depending on your politics.

Toyota's First EV Will Have a Name of BZ: Toyota BZ
First Videos From Inside The Boring Company's Las Vegas Loop
END_OF_DOCUMENT_TOKEN_TO_BE_REPLACED