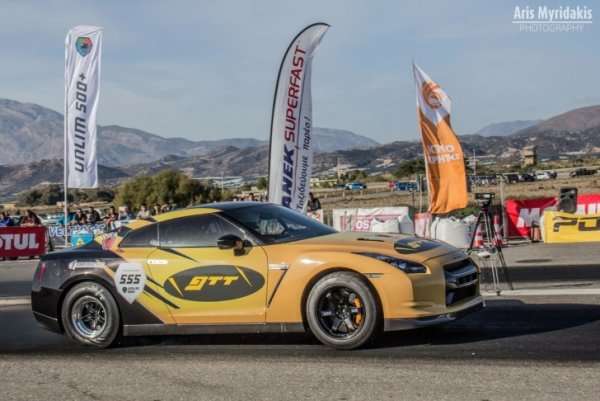 From Russia With Love: Fastest European GT-R is Russian Godzilla

A quarter mile in 7.81 seconds at 178 miles per hour is a Russian-tuned Godzilla on steroids, grabbing the European title for fastest GT-R.
Advertisement

A man named Gosha who owns a tuner shop called Gosha Turbo Tech has created a monstrous Nissan GT-R capable of doing amazing things with 1,800 horsepower. Yes, there's a comma and two zeroes. Yes, that is eighteen hundred horses; if you're wondering, the largest ranch in the United States, Waggoner Ranch in Texas, doesn't even have that many horses.

So, with 1,800 horsepower under its hood, this Russian-tuned GT-R is capable of 287 km/h quarter miles in 7.81 seconds. Of course, this Godzilla has been named Moses because its owner believes that, given a good enough run at it, it can part the Red Sea.

Of course, this being a New Cold War, the Russian's Moses Godzilla is not quite as quick as its American counterpart. Although there is some speculative conspiracy that it was faked in the Nevada desert, nevertheless, an American-tuned GT-R, called Alpha Omega, has done the quarter mile in 7.7 seconds, beating the Russians by a full second. It does that with an appropriately American round number like 2,000 horsepower at the wheels.

This also points to a trend for Godzilla owners to use Old Testament names for their cars. An interesting side note.

Now, back to Russia, let's look at that GT-R, Moses, making that hugely fast run for the European title. Thanks to Aris Myridakis Photography for the cover shot and to DragTimesInfo for the video.