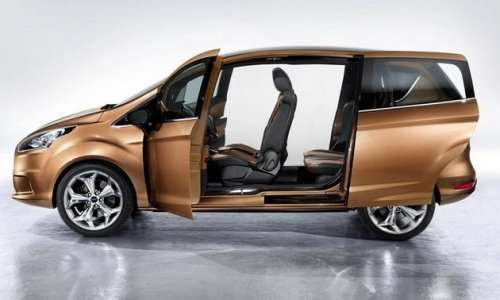 The production Ford B-Max minivan has been unveiled in Europe and will get a complete unveiling with full specifications at the upcoming Geneva Motor Show in March.
Advertisement

Ford unveiled the production version of the B-Max ahead of the Geneva Motor Show, opening in March, where the company will fully showcase the van along with specifications. It first appeared last year as a concept model with a very distinctive feature: no pillar between the front and rear doors. Opening the front door on the B-Max and then sliding back the rear reveals access to the interior unfettered by a central pillar. This is, surprisingly, retained in the production concept.

With the doors open, the B-Max sports a huge 59-inch opening into the interior. To make this possible, Ford used advanced materials engineering to create a cabin-length roll cage that spans front to rear on the entire vehicle, eliminating the need for the B-piller while retaining passenger safety requirements.

The B-Max is called a "small van" in European circles where it will be sold. It's one of several in the "Max" series Ford is introducing as its small car segment offerings that feature diminutive size and fuel consumption for today's conscious consumer. Unlike its C-Max brother, however, the B will not be coming to North America.

Ford says it will not be marketing the B-Max in America because it would be too expensive and would likely infringe on Ford Fiesta and C-Max sales in the same segment. Although the B-Max appears to be notably more convenient than the other two models Ford lists as potential rivals in the U.S., the fact that it would have to be imported would price it beyond its likely competition.

The B-Max will be the first Ford vehicle built on the nearly-complete production line in its new Craiova plant in southwestern Romania. The factory is currently producing the company's new 3-cylinder, 1-liter, turbocharged EcoBoost gasoline engine, which will debut in the Ford Focus Europe and will also be used in the B-Max.

The B-Max will enter European showrooms next fall.