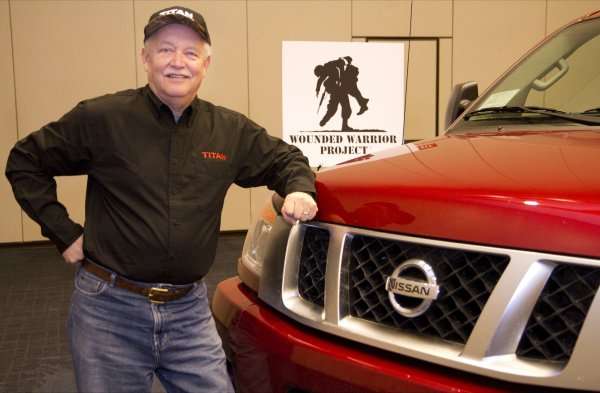 Nissan and the Wounded Warrior Project are taking a specially-outfitted Titan pickup truck and two wounded service members on the adventure of a lifetime in Alaska.
Advertisement

The idea for the plan to take wounded veterans to Alaska on the ultimate outdoor trip was started at the 2014 Shooting, Hunting and Outdoor Trade (SHOT) Show in Las Veggas, where Nissan asked journalists in attendance to describe their ultimate outdoor adventure. Joe Byers, pictured above, was the winning entrant with his Alaskan outdoor adventure plan for Wounded Warriors.

From there, Nissan teamed with the Wounded Warriors Project, incorporated Byers' plan, and had other outfitters join in to get the truck and gear ready to go. Two wounded service members were chosen from the Warriors and accommodations for their needs while on the trip were made both in the truck and in the gear. For his work, Byers will join the vets as unofficial guide and gets a one year lease on a Titan of his own as well.

The adventure will begin when the trio embarks on their adventure once they reach Alaska.

"In addition to their physical wounds, service members live with the invisible wounds of war including combat-related stress, depression, and post-traumatic stress disorder upon returning home," said Adam Silva, chief development officer, Wounded Warrior Project. "We're in the business of finding innovative ways to honor and empower these Wounded Warriors for a lifetime. Because of that, we are incredibly grateful to Nissan for providing this unique opportunity to two of these very deserving heroes."

Those Warriors selected were David Guzman and Kevin McMahon, both Iraq War veterans. Guzman suffered a traumatic brain injury during a night convoy mission as well as damage to his limbs and mouth, but has since gone on to complete his Associate's degree in both Culinary Arts and Interdisciplinary Studies. McMahon suffered emotional and physical trauma after multiple deployments, requiring several surgeries and he has volunteered extensively with the Wounded Warrior Project and recently joined as a WWP leader in New England.

On a personal note, this author has seen first hand and lived with the trauma (both seen and unseen) that comes from military service during conflict. The Wounded Warrior Project is one of the best organizations out there for helping veterans and their families cope with the hardships that come after the war is over. This year marks the organization's tenth anniversary. You can visit the WWP at woundedwarriorsproject.org.