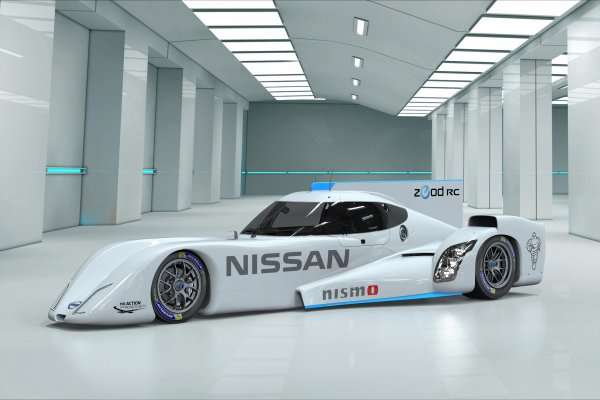 This weekend, the next-generation of Nissan's DeltaWing-style racing form for Formula One, the ZEOD RC, will make its public debut in Japan. The car is now in its final prototype stage, ready for the race track next season, powered by Nissan LEAF batteries.
Advertisement

The Zero Emissions On Demand (ZEOD) Race Car (RC) is preparing for a year in FIA's Garage 56 program of experimental race cars, taking up where its predecessor, the conventionally-powered DeltaWing racer (now in production and being sold to race teams) left off. The ZEOD RC is a hybrid-electric car whose electric powertrain components, batteries and motor, are straight out of Nissan's best-selling electric, the LEAF.

Japanese fans will be the first to see the ZEOD RC in its final prototype form before it hits the track next season when Nissan's NISMO team unveils it this weekend at NISMO headquarters in Yokohama. Nissan plans to use the ZEOD as a test bed for future LM P1 electric racers. This could, of course, mean that they will enter the 2015 season of the Formula E all-electric F1 racing circuit that begins next year.

The initial prototype showcar of the revolutionary electric racer was revealed at this year’s Le Mans 24 Hours, but yesterday’s press preview unveil at the Nismo headquarters showcased the dramatic evolution of the design featuring revamped styling, new cooling inlets and aerodynamic updates.

“The ZEOD RC utilises our technology gained through the development of the Nissan LEAF Nismo RC, the first EV racer based on the mass production zero emission vehicle,” Shoichi Miyatani, NISMO president said. “The LEAF RC’s energy management and efficient energy recovery system that is suitable for racing are just examples. We believe these technologies serve as important steps for using EV for motor sports.”

The race team will become the first to complete an all-electric lap in a Le Mans circuit, with the Nissan ZEOD RC becoming the first full-speed, full-lap-capable electric on the French circuit (8.5 miles at about 185 mph). Batteries are recharged via regenerative braking and a small, lightweight, turbocharged internal combustion engine provides more. Read more about how it works by clicking here.

“Our goal for the program is to draw back the curtain for the fans to see the innovative technology that Nissan is developing," said Darren Cox, Nissan Global Motorsport Director. "We could not think of a better place than the Fuji round of the World Endurance Championship for the actual ZEOD RC to appear in public for the first time. We have interrupted our intense testing in the UK to fly the car to Japan for this display for the Japanese fans.”