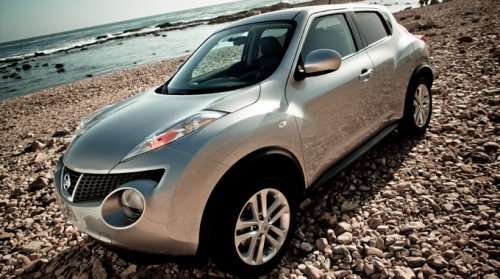 Nissan unveils the loudest Juke Box in the world

Nissan has taken the idea of a juke box mobile with the loudest car stereo in the world mounted in a Juke, calling it, appropriately, the Juke Box. Meet the new life of the party.
Advertisement

Headed for the beach? The lake? A party? Often, going to these places and planning to have a hot stereo to crank the tunes while you're there means spending a lot of time and learning the complexities of audio at a stereo installer for an after-market system.

Unless, of course, you opt to buy a Juke Box.

Nissan's Juke is a capable and popular little compact SUV that can get you to your destination in fun style. Debuting at Le Mans this weekend, though, the Juke Box is an upgraded version of the little Nissan with a 150 decibel sound system powered by 18,900 watts of surround sound stereo.

Now that it's debuted, the Juke Box will tour Europe, showcasing its built-in PA system and DJ console to go with its ambient lighting system. 150db and a built-in DJ setup? That's serious tunage.

Now add this: broadcasting to the Ministry of Sound app so you can not only be the life of the party at the tailgate, beach, or anywhere else, but also let those who aren't there listen in via their smart phones or computers.

This past week at the Rocky Mountain Driving Experience put on by the Rocky Mountain Automotive Press, I had the chance to drive a 2012 Juke on an offroad rally course. The little SUV was all stock, nothing added, and it performed admirably. Taking dirt corners and bouncing from short hills to soft dirt, the Juke kept up a solid performance throughout. Although the Nissan rep riding with me was obviously nervous at my dirt-throwing abandon, and generally just held on for dear life, he remarked afterward that he was glad I'd been willing to throw the vehicle around and see what happened. I told him I've done the same in much more purpose-built rally vehicles and was impressed with the Juke's ability to recover. Of the six manufacturers who'd brought SUVs for us to pummel that day, the Juke was definitely a contender. It's greatest advantage was being the lightest of the attendees and thus easier to get airborne.

Including the ability to fry ear drums and melt window glass with 150db of tunes? That would have been pure icing on this already sweet cake. No word from Nissan as to whether the Juke Box will come to the U.S., but we can keep our fingers crossed that it will.

Here's video of the Juke Box: