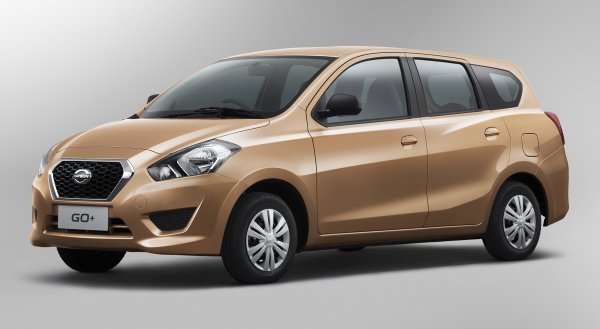 Nissan is bringing back the Datsun brand and is launching an all-new lineup for a key market, Indonesia, including this new 2014 Datsun GO+. Could this right-sized MPV see American sales down the line?
Advertisement

The new Datsun GO+ debuted in Jakarta as a four-door hatchback people mover for the Indonesian market. Nissan has promised a smaller, more agile version of the car next year, which will be called the GO. The GO+ is a 5+2 seat MPV built to fit the needs of this particular Asian market, but it is a vehicle which could rival the similar Mazda5 minivan sold in the U.S.

The Datsun GO+ looks like a small minivan, though it has some nicely carved lines and sleek edges to make it stand out. It can be purchased as either a 5-seat hatchback with a large cargo area or a 5+2 seat MPV with folding rear seats. It is built to be light weight and efficient with the agility that Indonesians will require on their often congested roadways.

The GO+ is powered by a 1.2-liter gasoline engine mated to a five-speed manual transmission. The Datsun GO+ was designed and engineered by local designers and engineers for the Indonesian market with global help from the Nissan team to ensure quality standards were met. The GO, coming next year, will be a smaller, lower-cost version of the GO+ with a greater focus on fuel economy and agility rather than people moving.

Nissan plans to have the Datsun brand accounting for half of its Indonesian sales by 2016 and will be building and sourcing the GO and GO+ locally.

"With the return of the Datsun brand, we are changing mobility. And we're ensuring greater access to the pride, independence and opportunities that car ownership provides. It's exciting to know that, for many Indonesians, the first new car they buy will be a Datsun," said Carlos Ghosn, Nissan Motor Co., Ltd. President and CEO, unveiling the cars.

Can we expect to see the GO or GO+ in the U.S.? Not likely. We could see a similar vehicle, however, to the GO+ in his market should Nissan see a need to compete in the MPV segment with its only real current player, Mazda with the 5. The market is relatively small, but has seen steady growth and with the new fuel economy standards, some automakers may begin to look away from crossover platforms and towards MPVs as a fuel-saving option.

Here is a short video advertising the new GO+: