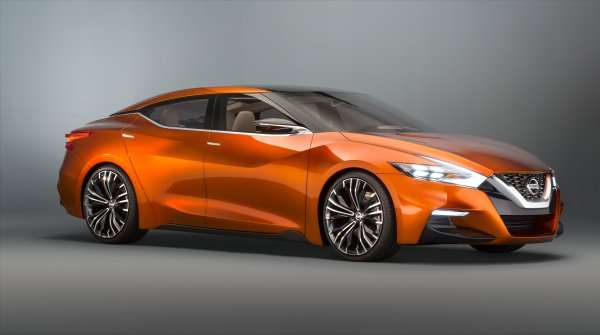 We dug deep a couple of weeks ago, making predictions about the Nissan Sport Sedan Concept and were.. well, in the general ballpark. Sort of. Here's what it really is.
Advertisement

When Nissan first announced their plans to unveil a new Sport Sedan Concept at the North American International Auto Show (NAIAS) this year, we were pretty excited. Using the limited data at hand, we made educated guesses as to what that sedan would be. Now that it's been unveiled, we can see that we were.. well, at least in the general ballpark. Assuming it's a big sports complex with half a dozen diamonds or so. With stadium seating. And parking lots.

OK, we were mostly wrong. Our prediction was that the Nissan Sport Sedan Concept would be a Sentra-type sedan with a sportier stance and tiny little four-cylinder powertrain. Let's see how wrong we were.

At a stunning press conference, Nissan Senior Vice President and Chief Creative Officer Shiro Nakamura and Nissan Executive Vice President and Chief Planning Officer Andy Palmer introduced a beautiful new four-door sports sedan concept in a beautiful copper-like color called Strad Amber. It showcases the new design direction for Nissan and "..mirrors the strength, power and capabilities of the engineering and innovation that serves as the foundation of every Nissan vehicle," said Nakamura.

This was a full design concept, not just a study on which some new paint and a couple of body panels were slapped on a current model and set on stage to spin around and dazzle. It's entirely new inside and out with some bold features that may not be likely to go to production, but are very cool anyway.

The dimensions of the Sport Sedan Concept make it clearly a midsize offering, though with a more muscular build than the Nissan Altima, the company's current midsize sedan. At 191.7 inches in length and 75.3 inches in width, the Sport Sedan Concept is about the same length, but more than three inches wider than the Altima. It's also nearly three inches shorter, with a far more aggressive roof line. It also adds two inches more to its wheelbase over the Altima. Clearly not a knockoff masquerading as a new look.

Here's the unveil video in which the Sport Sedan Concept has its cover pulled as it's flanked by the two iDX concepts:

As you can see from the images above, the V-Motion design language Nissan has been using with its newly-minted releases is continued here, flowing from the dramatic front end through the hood and accentuated by boomerang headlamps in LED and wide, sloped windshield. This continues along the body side lines, giving an overall projection of motion accentuated by 21-inch wheels.

The car's primary exterior features beyond that dynamic design is the "floating roof" - a full glass canopy from front to rear that sits low, but creates open interior space. This roof, externally, adds balance to the low, solid stance of the car's appearance by dissipating the substantial lower body as the eye moves upwards.

Inside, the Sport Sedan Concept includes premium materials throughout with little hints of possible future changes coming to Nissan's everyday lineup. Diamond-shaped graphics create motion in the interior, breaking up the flat surfaces of seating and dash, giving it a more three-dimensional look - something we could see in premium-level packaging soon. The other high contrast colors and metallic accents are nothing new, of course, and while they look great in conceptual form to enhance the bling factor, they are rarely popular with consumers.

Under the hood, the Nissan Sport Sedan Concept gets even more interesting. Powered by a 3.5-liter V6 (the same engine offered in the premium Altima 3.5 SL) and sport-tuned Xtronic CVT (continuously variable transmission, also in the Altima), the car will have oomph. The current Altima's engine and transmission with those specs outputs 270 horsepower and surprisingly good performance for its class. The current-generation Altima has won accolades from Kelly Blue Book, Kiplinger's, and Edmund's so it's no surprise that a sport concept from Nissan would include this great powertrain (a powertrain very likely to feature in the next-generation Q60 from Infiniti).

While we can only guess at performance figures for this Sport Sedan Concept, they're likely to be very good if the car is as lightweight as it appears. The current real-world 0-60 mph time for the Altima 3.5 SL is about 6.5 seconds and could easily be beaten by half a second or more in a more sport-centric vehicle of similar size and weight as this concept would be.

Will the Sport Sedan Concept see production? Not likely in the conceptual form shown at Detroit, but it could become a new sedan offering, though when and as what is anyone's guess. We're done with predictions here. You make a guess and let us know what you think. It's a pretty big ballpark. Maybe you'll do a better job staying in it than we have.