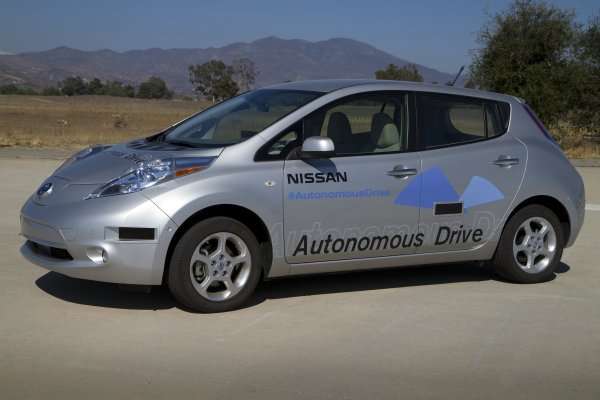 Nissan says your car will drive itself sooner than you think

Nissan Motor's Autonomous Driving program has hit some big benchmarks and the company says that they will have self-driving cars ready for you to purchase within seven years.
Advertisement

All your driving R belong to us may be the new Nissan tagline going forward. The company has met some huge milestones in its Autonomous Driving project and says that self-driving vehicles will be ready for market by 2020.

The company says that their program is ahead of schedule to meet that 2020 deadline and that it will likely feature the technology in several vehicles and in multiple markets. The final goal is to have the technology as an option in nearly all models that Nissan sells within two vehicle generations. It is pursuing the idea through partnerships with top universities such as MIT (Massachusetts Institute of Technology), Stanford, Carnegie Mellon, Oxford, and the University of Tokyo.

Autonomous Drive has been a project at Nissan for years, with engineers pursuing the idea and Nissan sponsoring projects at universities for over a decade. Work is underway in Japan to build a dedicated Autonomous Drive project proving ground and it will be completed late next year (2014). The facility will feature realistic townscapes made of masonry and the various urban and suburban elements that may be encountered by the self-driving cars. The goal is to over-test the vehicle, to push it well beyond expected real-world limits, and perfect it so it's ready for actual use.

The Nissan system involves sophisticated laser scanners, Around View Monitor camera systems, and advanced artificial intelligence (AI) to control it all. The Autonomous Driving project is part of Nissan's overall Safety Shield system which monitors the area around the car, at all angles, for hazards.

Nissan is not the only company pursuing robotic cars, of course. This technology would compete with Google's self-driving cars, which are also expected to be on the market (as a technology option) in about the same time period. Other companies such as Audi (part of the Volkswagen Group) and Volvo have also been testing similar technologies.

Imagine that just seven years from now, your commute could be far simpler than it is today. Your Nissan LEAF or Altima could have a selectable "auto drive" option which allows you to control the vehicle as you wish or leave the driving up to it so you can sip coffee and check your emails while sitting in traffic on the expressway. Further, family road trips may no longer exclude the driver from the in-car games and fun. Those are just for starters. Everything in our current driving paradigm could change.

Most who study this technology believe it will greatly improve accident rates and reduce highway deaths thanks to the more predictable nature of self-driven vehicles. Commercial transportation and other industries may also see big changes in their operations once this technology becomes more mainstream.

Those interested in Nissan's technology can visit a Nissan 360 event in Southern California to see it demonstrated. Or go online to Nissan360.com for more.