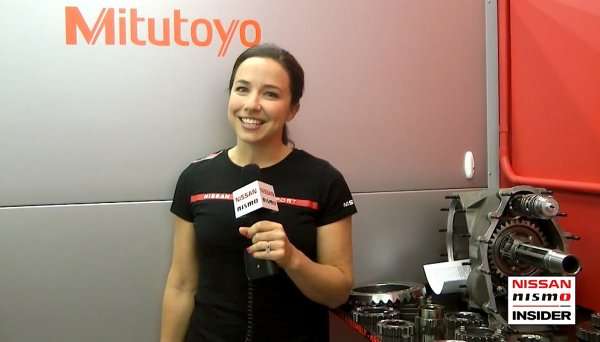 Nissan Motorsport has published a series of videos showcasing the Australian V8 Supercars race team in which the lovely Elysia Kelly hosts several short segments that show behind-the-scenes operations at the race center. Check out the series here!
Advertisement

This first year for the Nissan NISMO Motorsport's V8 Supercars team has been a big one. The new Altima race cars featuring powerful engines, beautiful paint and appliques, and a strong team of drivers, engineers, mechanics and shop personnel. One of those people is Elysia Kelly, who works in the team's merchandising department.

In this series of videos, Elysia takes us through the V8 Supercars team's day-to-day operations, showing us the workshop, engineering department, and more, proving that a race team is not just about the drivers behind the wheel, but the other hard working people who make it all happen. 72 of them in all, it turns out.

In the first episode of Nissan NISMO Insider, Elysia introduces us to the facility and its head of operations, John Crennan, Chairman of Nissan Motorsport:

Next, Elysia takes us into the workshop, where we meet some of the mechanics who literally operate on the cars both in the shop and on the track:

Then Elysia visits the facility gym, where the drivers, pit crew, and other staff keep themselves in shape. Exercise scientist Craig Harper, who runs the gym, talks about what is required to keep a professional race driver in shape:

On her home turf, Elysia then takes us to the merchandise shop in the facility and the competitive world of team merchandise:

From there, we're taken to the Composites Shop where all of the body panels and components of the cars are made in-house. In the shop, fiberglass, kevlar, and resin to create the body panels that adorn the cars as well as to repair them after incidents.

Then, moving on, Elysia takes us into the Print Room where the stickers and coverings that make the cars look like they do are designed, printed and affixed to the cars. Replacement and repair stickers are also added. Andrew Turnbull, head of the Visual Industries department, walks us through the process:

Next up on Elysia's list of departments is the Sub Assembly section, where engineers and specialized mechanics work on all of the parts of the car that aren't the engine or body. Every car is torn down bolt-by-bolt, inspected, and rebuilt again after every race.

Of course, what would be a V8 Supercars shop if they didn't have test days on the track? In this episode, Elysia takes us to the race track where the drivers and engineers put the cars through their paces for tuning and adjustment before races begin:

Then an unusual look at the trucks and drivers who haul all of the cars and equipment from race to race:

And, finally, the latest Nissan NISMO Insider in this series shows us the Engineering Department at Nissan Motorsport. There are seven engineers on staff, each experts in various parts of the cars in the sport. Craig Spencer, the head of the department, walks us through what each engineer is in charge of doing and the process of working with V8 Supercars:

The series is a great look into what happens year-round, day-to-day at the world's largest V8 Supercar team at Nissan NISMO.