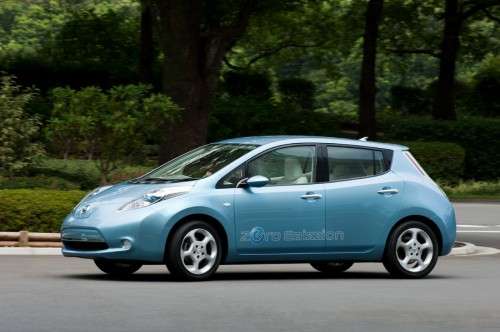 Nissan Leaf coming to a driveway near you

The Leaf is leaving its select market metropolitan pastures and going national today. Nissan has finalized distribution of parts and completed training for sales and service at dealerships across the nation, so their battery electric car is now ready for national sales. Customers who have placed deposits on the EV will begin seeing deliveries today, coast to coast, and throughout March.

Initially launching in four states, the Leaf quickly became popular, outselling the Chevrolet Volt despite the Nissan's more limited market. It began in four states and then expanded to cities in 29 last fall. Still, pickings were slim until now for those looking to go electric. Thanks in no small part to mother nature.

The Leaf was initially meant to go national late last year, but Nissan had to delay those plans due to the production losses during the tsunami and earthquakes that battered Japan. Production has since resumed and ramped up to make up for losses and increased demand, so Nissan says they expect to fill all pre-orders quickly and get cars on showroom floors fast.

The Leaf is a 4-door hatchback in front wheel drive. It sports 107 horses in electric motive power with a claimed 100 mile range and an EPA estimated range of 76 miles from the EV's 24kWh battery pack. MSRP starts at $35,200 and goes up if optional 220V charging is included. Charge times range from 7+ hours at 220V to more than 18 hours at 110V.

To make up for any range anxiety experienced by owners, the Leaf's built-in navigation system includes charging station locations and spells out current battery usage and estimated charge times as well as current range expectations. The signature Nissan "tree" to indicate how well you're "eco-driving" to save fuel (power) is in the dash as well.

As with most electrics, cold weather drivers can expect shorter ranges out of the Leaf. First-time electric drivers will immediately notice the powerful off-the-line performance of the Leaf and the fact that no shifting, either manually or by a transmission, is required. The Nissan Leaf does, however, suffer from mushy steering and a stiff ride. It handles very well and holds good traction, however, due to its floor-mounted battery pack which keeps weight distribution low and centered.

Now that the Leaf is available around the country, perhaps more people will be able to see how they feel about the electric revolution.