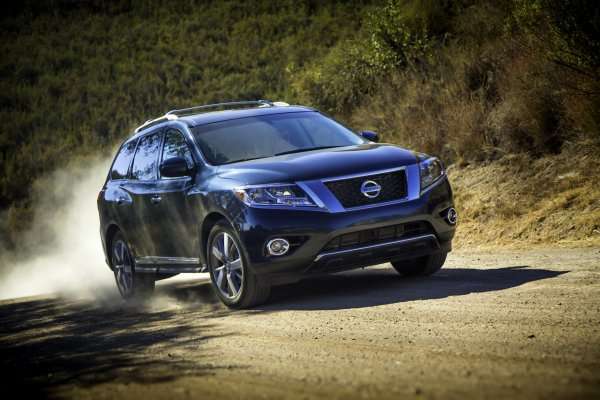 A recall has been issued for several 2013-2014 model year Nissan sport utility and crossover vehicles for a braking issue. Find details here.
Advertisement

Nissan has issued a voluntary recall on about 188,000 vehicles, including the 2013-14 Pathfinder, 2013 Infiniti JX35 and 2014 Infiniti QX60 worldwide for braking problems associated with the anti-lock braking system (ABS) control software.

During light braking on rough roads, the automaker said, the ABS brake pressure output software may lead to an increased stopping distance, which could cause a longer stopping distance than the driver may expect for the given pedal force. This can be overridden with more brake force in some cases and the stopping distance is still within the parameters of safety requirements, but Nissan is issuing a recall notice regardless in order to avoid potential accidents.

The fix is a simple software upgrade to the ABS system and affects about 153,000 vehicles in the United States and another 13,000 in Canada. Nissan notified the National Highway Traffic Safety Administration (NHTSA) that it implemented the software reprogramming at the factory on September 20 and decided to issue the recall on October 7, which published publicly earlier this week.

The braking problem was first noted by a Canadian dealership, which sent Nissan headquarters in Tennessee a technical report on the issue. Nissan then conducted vehicle incident tests in Canada in an attempt to duplicate the problem and identified four previous field reports that were related to the problem, though on different vehicles. Those field reports, all on the Infiniti JX35, could not be replicated, however, but the shared system on the three vehicles was considered the culprit during testing on the others.

Nissan will notify owners within the next two months and dealers will reprogram the software free of charge. All vehicles currently in dealership inventory are undergoing the upgrade now and vehicles made at Nissan's factories from September 20 forward have already been upgraded, including most 2014 model year vehicles.

LG's New EV Battery Plant Is a Welcome News for Tesla
Tesla Giga Berlin's New Hurdle: It's Not Only the Gov't, but Now Tesla Itself
END_OF_DOCUMENT_TOKEN_TO_BE_REPLACED