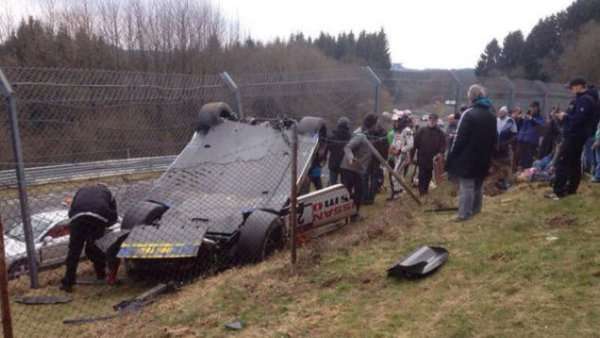 Jann Mardenborough's Nissan GT-R NISMO literally stood on its tailfin and flew into the crowd on a corner of the Nurburgring during the first VLN endurance race, crashing through the safety fence and into spectators, injuring several and killing one.
Advertisement

Jann Mardenborough was driving as his GT-R NISMO lifted upright, standing briefly on end, before crashing into the debris guard and into the fence separating the track from spectators. The Number 23 injured several onlookers and killed one, though Mardenborough emerged from the wreck unscathed. An official statement from VLN about the wreck during the first race of the season confirmed details and declared that the race had been stopped and would not be restarted and post-race ceremonies were cancelled.

Emergency crews reacted quickly, taking several to a nearby hospital, but failing to revive one of the onlookers. With condolences to the families of those injured and killed, VLN Endurance Championship issued a statement regarding the incident. The wreck, which happened this morning, local time, is being investigated and as yet there is no known cause.

From spectator video of the incident, it can be surmised that the GT-R NISMO was lifted, likely through a combination of track position, conditions, and possible wind gusts. Once in the air, there was nothing that the driver could do to control the car or prevent the accident. NISMO issued the following statement regarding the accident:

The driver, Jann Mardenborough got out of the car and, after initial checks in the circuit Medical Centre, has been taken to hospital for further routine checks.Today's events have been a tragedy. We are all deeply shocked and saddened by these events and our immediate thoughts go to the deceased, those injured and their families and friends.The team is fully co-operating with the race organisers to conduct an immediate and thorough investigation into this incident.

The accident happened on Posten 80 (STreckenabschnitt Flugplatz) on the Nurburgring. The emotional toll of the accident and its consequences are likely weighing heavily on Jann Mardenborough, a young driver who has had a promising career so far. Mardenborough is slated to race in the 24 Hours of Le Mans later this year. It is unknown whether he will continue his race schedule.

Video of the accident can be viewed on YouTube. Out of respect for the fact that loss of life was involved, we are not reproducing it here.

The headlining photo of the wreck is courtesy of Alex Garcia on Twitter.