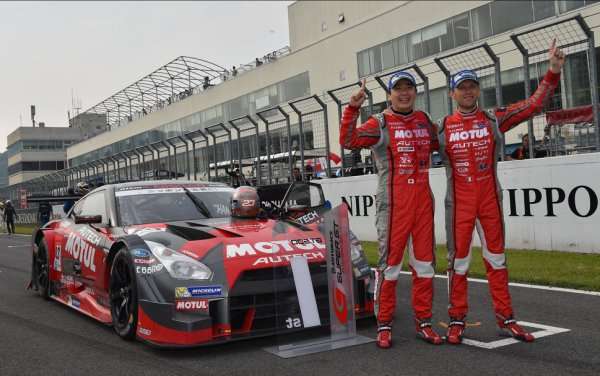 Taking the pole position wasn't good enough for the No. 23 MOTUL AUTECH GT-R in Sunday's race, it had to stomp the competition without mercy as well.
Advertisement

This weekend was the 2014 AUTOBACS SUPER GT Round 3, held at the foot of the Aso Mountains at the AUTOPOLIS. After winning pole position for the race, the No. 23 MOTUL AUTECH GT-R driven by Tsugio Matsuda and Tonnie Quintarelli was primed for a great race day.

The pole was taken by Quintarelli Saturday by shattering the former course record by a wide margin. The flag dropped at two in the afternoon and the race was underway on Sunday, and the No. 23 GT-R began creating space between itself and contenders.

As the race continued, it became clear that the lead which Quintarelli held was not going to be given up, though the middle stages of the race had other contenders fighting hard for second and third positions. By the time the race was halfway through, in fact, all three top positions were held by GT-R teams.

The pit and driver change put Matsuda behind the wheel and the MOTUL AUTECH GT-R held its first position thanks to quick work by the pit team and a fast refuel. The only time during the entire AUTOPOLIS run that the MOTUL GT-R was in danger of losing its first position was during a safety lap when a GT300 crashed on the 48th lap. With nine laps left, though, it didn't take much for Matsuda to regain his lead and continue the NO. 23's dominance.

In the end, the podium was a clean sweep for the Nissan GT-R, with the top position being the No. 23 followed by the S Road MOLA GT-R and the CALSONIC IMPUL GT-R. That IMPUL had been back-and-forth with a pair of Lexus RC F racers during the final stages.

This was Matsuda's thirteenth win the the GT500 class and the seventh for Quintarelli.