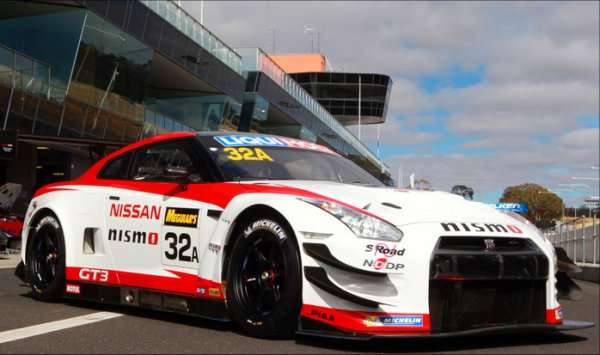 The NISMO Athlete Global Team crashed out of the 2014 Bathurst 12 Hour in New South Wales at Mount Panorama. The #32 GT-R NISMO GT3 made heavy impact and was totaled.
Advertisement

The return of the Nissan team to the Bathurst 12 Hour was much-anticipated as it would mark the first time Nissan had raced on the circuit in that race since the company's back-to-back Bathurst 1000 wins in 1991 and 1992. Australian race fans have been embracing the return of Godzilla to the racing circuit.

During lap 59 of the race, after a driver swap had replaced Rick Kelly with Katsumasa Chiyo, the Clearwater Ferrari 458 spun on the McPhillamy Park exit, dropping fluid on the blind corner and leaving the stricken Ferrari in the field. Chiyo could not avoid the 458 and hit it solid, resulting in a heavy impact with the rear of the GT-R smashing head-on with the Ferrari and spewing parts and body panels everywhere.

Chiyo was taken to the circuit's medical center as a precaution, but neither driver was injured in the crash. Sadly, however, it ended the GT-R's excellent run that day.

Through the first two hours of the race, local favorite Rick Kelly took the Nissan GT-R NISMO #32 from fifth position (gained during qualifiers) to third position. After the driver change at the two hour mark, the Nissan team was continuing a hot back-and-forth for third with Darrell Lea McLaren MP4 12C. That ended with the wreck.

It also meant that the other two Nissan drivers, Alex Buncombe and Wolfgang Reip, were unable to compete at Bathurst.

“It’s really is disappointing,” said Rick Kelly. “I know this feeling, when you go to Bathurst and you have a good shot and it gets taken away. That’s racing. We just got caught out. The Ferrari dropped its guts everywhere, stopped on the track and poor Chiyo had nowhere to go on the fluid and went straight in very hard. That’s what’s it’s like across the hill."