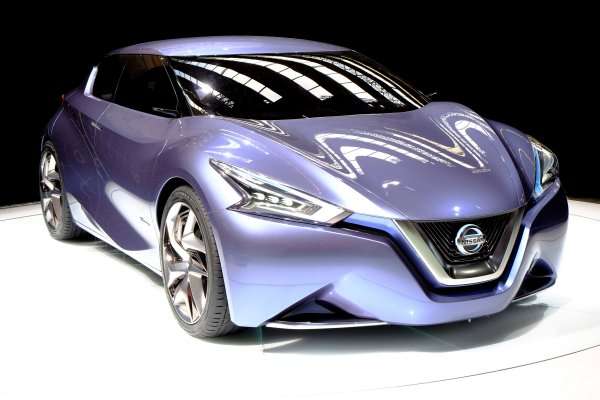 The European debut of the Nissan Friend-Me concept car at the Frankfurt Motor Show previews the future design language the company will take with their vehicles plus a new PureDrive hybrid drivetrain that is to become Nissan's sport hybrid option. Get in depth with the Friend-Me here.
Advertisement

Concept cars are always fun, showcasing the possibilities - no matter how dreamy - for automotive's future. When the Friend-Me debuted at Auto Shanghai this year, it was somewhere halfway between a dreamy possibility and concrete actuality. Now with its European unveiling at Frankfurt, we have more information about the car and can definitely place it inside reality.

The Friend-Me is a showcase of both exterior design and interior connectivity and function as well as a detail in Nissan's hybrid powertrain plans.

"We call our solution ‘Distilled Da Qi,'" said Taiji Toyota, Vice President of Nissan Design China. "'Da Qi is about casting an aura, about standing out, but at the same time going with the flow, fitting in. It's a question of balance, and we've worked to refine it right down to the essence. The result adds an entirely new and youthful dimension to the sedan category." Exterior Design
The Friend-Me concept is a continuation of Nissan's current, new design language, but taken to the next level. It combines the flowing lines with bold accents that mark the current-generation Nissan with a futuristic saloon sweep and more pronounced, smaller grille. The front fascia "smiles" at the onlooker, hinting, in part, to the concept's name, while the powerfully accentuated hood lines are underscored by the flying arrowhead-shaped headlamps reminiscent of today's Nissan. Blackened pillars hold the dark glass greenhouse to create a wrap, much like the current Quest, and the fastback hatch at the rear is very much taken from the Juke.

The wheels are highly stylistic, evoking the same arrowhead used on the front and rear lighting. Yet for the Friend-Me, what's seen on the exterior is only the beginning. Inside, it's just as innovative.

Inside the Friend-Me
The interior of this concept marks another third of its name's origins. While the smiling fascia says "Friend-Me" to the onlooker, the interior says the same to the driver and passengers.

The Friend-Me seats four and has connectivity to "make four into one." Everything shown inside the concept is realistically available today, however, with no ultra-future ideas being presented. From the lounge-style seating, with all of their sculpting and multi-adjustments, to the center console that runs the length of the interior, the Friend-Me is meant to make those inside feel at home. The center console houses screens below its glass-like surface that allow each passenger to configure their own desires into the in-car experience and share items with others as well.

Passengers can surf the Internet, adjust climate and personal audio, connect devices, and more through their individual interfaces. They can instantly share things, from social media to photos to whatever song they're streaming, with others in the car with just a touch. They can also access real-time metrics on the car itself, including performance, status, fuel economy and the like; this includes navigation information, GPS coordinates, etc.

For the driver, the display is simplified to reduce distraction. For added benefit, passengers can look up information, change navigation settings, and share this with the driver, allowing for hands-free operation and cooperative traveling. The driver, of course, has complete control over what is shown on the driver's screen and what passengers can change on it.

The friendliness of this new concept doesn't end there, the Friend-Me also makes happy with the environment. The Dreamy-Real PureDrive Hybrid
Under the hood, the Friend-Me concept is a next-generation platform for fuel economy and performance. The PureDrive hybrid system is based on existing Nissan architecture as well as next-generation innovations that are within reach. This powertrain is designed to deliver performance and efficiency at once. It is a plug-in hybrid architecture utilizing the latest-generation lithium-ion batteries, an extremely efficient gasoline engine from the Nissan lineup, and an electric motor to add low-end torque and fuel-saving power to the whole.

While details are not given for performance specifications, the PureDrive system is said to be in late-stage development at Nissan's R&D facilities in Japan.

Friend-Me Please!
In all, this concept is a beautifully-designed car from Nissan with more than enough reason to be named Friend-Me.

LG's New EV Battery Plant Is a Welcome News for Tesla
Tesla Giga Berlin's New Hurdle: It's Not Only the Gov't, but Now Tesla Itself
END_OF_DOCUMENT_TOKEN_TO_BE_REPLACED