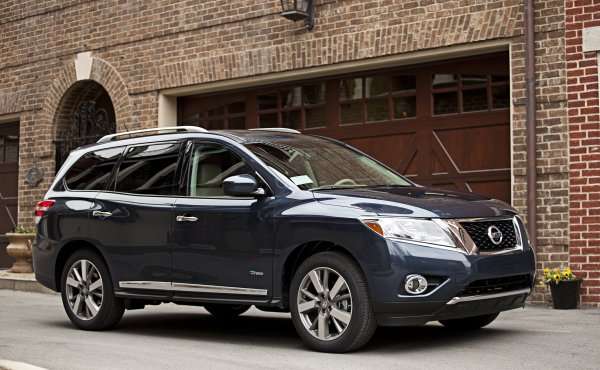 Pricing for the 2014 Pathfinder Hybrid has been announced, making for fourteen total model choices in the Pathfinder SUV lineup of options.
Advertisement

The 2014 Nissan Pathfinder Hybrid is on sale now in dealerships nationally and has a starting MSRP of $35,110, plus destination. The hybrid option offers six model configurations and up to 28 mpg on the highway (26 mpg combined).

The 2014 Pathfinder Hybrid pairs a supercharged 2.5-liter gasoline engine with a 15 kW electric motor and lithium-ion batteries. Passenger seating and space does not change with the hybrid, as the batteries are placed underneath the third row, and cargo room remains the same.

The hybrid system uses a Nissan Intelligent Clutch System in a one motor/two clutch parallel to manage power from the electric motor and the gasoline engine into the powertrain in seamless operation. The combination of 2.5L engine and 15 kW motor provide the same performance as the larger 3.5-liter V6 that appears in the standard gasoline model, outputting 250 horsepower and 243 lb-ft of torque versus the larger engine's 260 hp and 240 lb-ft. The power of the hybrid system is sent through an advanced, next-generation Xtronic CVT (continuously variable transmission) and uses regenerative braking to recharge the batteries.

Model options are in two-wheel and four-wheel drive configurations and priced starting at $35,110 and going up to about nine thousand more, depending on model package.