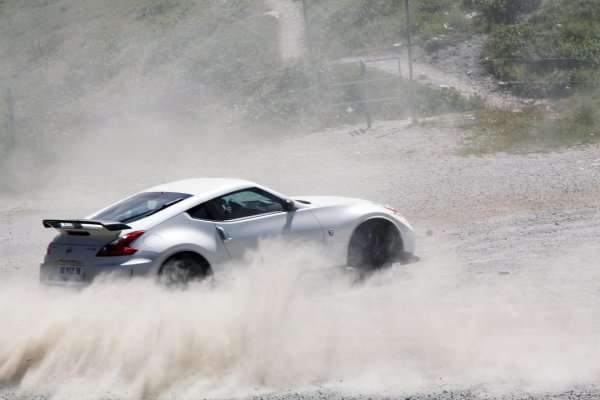 The video, titled "NISMO vs Wingsuit", is two minutes of excitement as two of the coolest adrenaline rushes on the planet - a Nissan 370Z NISMO and a BASE jumping all star - go head-to-head on-screen.
Advertisement

What happens when you take a Nissan 370Z NISMO, the world's most accomplished BASE jumping wingsuit wearer, a Juke with three big screen TVs, and a film screw to Switzerland's beautiful Susten Pass?

You get some of the coolest, adrenaline-filled film footage in some of the most breathtaking backdrops imaginable. That's what.

The Juke was used to stage the filming and allow communication with the over-flying wingsuit jumper, Dave Barlia. As Barlia jumped off the cliffs and crags in Susten Pass, NISMO driver and GT Academy Champion Peter Pyzera piloted the 370Z NISMO down the 4,501 foot descent of the pass. And for about two minutes, the two were head-to-head as camera crews captured every second.

The film is the first in a series of short films Nissan is doing to showcase the cutting-edge technology in its road cars and the spirit of excitement its NISMO athletes share. This film showcases the biometric harness used in the 370Z NISMO and the specialized JukeRide system used during the Driver Development Programme at the NISMO Lab. Nissan's driver program is one of the most advanced in the world and has consistently taken drivers with nothing but raw talent and turned them into internationally-competitive racers in just three months.

On completion of the descent, Nismo Athlete Pyzera commented: "That was absolutely amazing, I could see Dave up above me and I just had to concentrate and get in the zone to beat him down. Afterwards we looked at the data we gathered from wearing the biometric harnesses, which monitor my biometric data, and I could see when I was totally focussed. While this is fun, it is serious business - it not only improves my performance but is invaluable in helping me prepare for my next race."

Watch it happen in the film below, followed by two others, showcasing the technology behind the scenes and the making of the short film itself.